APRS has had problems since its inception, and it is not surprising… but the future of APRS has arrived.

At first it was billed as the “Automatic Position Reporting System” which naturally put an emphasis on position reports in a timely manner.

Later it was redefined to be “Automatic Packet Reporting System” perhaps an early acknowledgement that it would not be an effective real time position reporting system in the medium to longer term when based on then current ham radio technologies and management practices.

Unfortunately, APRS was based on AX.25, so it inherited most of the problems of AX.25, perhaps even more so as hams who were not really interested in the underlying data transmission system implemented transmitters and digipeaters that did not comply with standards or conventions… “all knobs to the right” seems to have been the modus operandi. 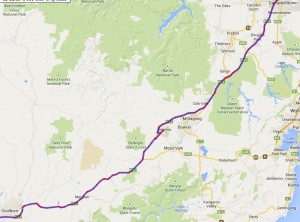 Above is a stunning example of a track over a section of highway of more than 120km. The posits occur mostly less than 2km apart, sometimes closer, and there are no significant gaps… the track follows the highway.

I have never seen this quality of tracking from VHF FM APRS even though the section of road is serviced by two digis on prominent hills, and one in Goulburn on a less prominent hill.

The reasons why radio does not provide that level of track resolution are numerous, too numerous to mention here.

The track was laid down by APRS of the future… APRSdroid.

Mind you, the Internet hasn’t killed APRS, hams have by the way in which they (ab)use it.