A recent discussion online on the use of this facility in some model or other NanoVNA/firmware combination quickly ran to over 100 posts, and you might think it is really difficult, or plain does not work.

Let me say I am leery of built in features that invite users to perform something they do not understand, and may misinterpret the outcome.

Lots of the discussion ran to explaining why measurement of a sample of coax  would be out by 5% or more, lots of pseudo tech discussion about age related, contamination related, quality related explanations for the measurement, things which might cause the measurer to condemn the sample, to discard it.

Well, you would want to be pretty confident in yourself to make that call, given that the explanation might well be measurement error.

I don’t use this facility, so I am quite unfamiliar with it, and there is no documentation, so one make make an informed guess as to how to use it.

The DUT is a length of 50 year old RG213 with NCV jacket, with good quality N(M) connectors and measures 9.860m to the outside of the connector shells. Note that the reference plane for the male connectors is approximately 10mm @ VF=1 inside from the outside plane of the shell.

The cable velocity factor has previously been carefully measured: NanoVNA – measuring cable velocity factor – demonstration – coax. Note that VF (0.66) is not totally independent of frequency, but the error is small in this case, and it is rounded to 1 part in 66, +/- 0.8% rounding error.

A word about N type connectors. 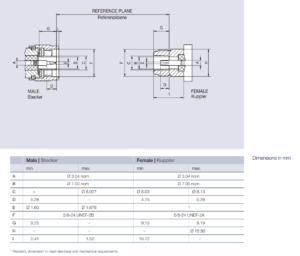 The ‘standard’ reference plane on N connectors is shown in the diagram above. For the purpose of this article, length measurements were made between the reference planes at both ends of the cable.

The N connector maintains Zo=50Ω through the connector, though a 9.3mm section of the path is usually air dielectric which needs to be taken into account for mm accuracy as needed for some applications (eg tuned line lengths used in repeater filters).

For the measurement of resonances here, a short circuit (SC) line termination is used as it provides the best accuracy of Zo in the region of that termination, albeit the last 9mm is at VF=1.

A first approximation model for capturing the effect of the location of the SC and OC in calibration parts is simply the propagation delay of the reflected wave, often known as port extension in VNAs and client software. This should be a quite adequate correction for quality termination parts below 100MHz. 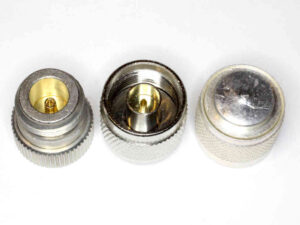 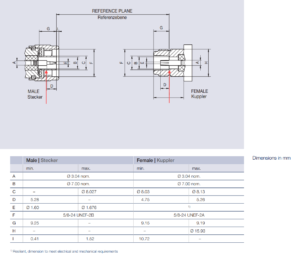 The red arrows on the diagram above show the common location of the short circuit on SC termination parts. The N(F)-SC is at the reference plane, the N(M)-SC is about 5mm or 16.7ps (one way, or port extension=33.4ps) from the reference plane.

The DIY N(M)-SC has its shorting plate further out than common commercial parts, it measures 54ps greater one way delay than one with the short at the red arrow above (port extension=87.4ps).

In the case of the cable measurements made for this article, the N(F)-SMA(M) adapter has to be included. 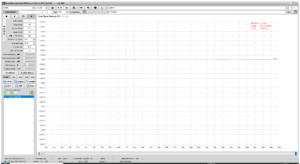 Above is a screenshot of e-delay adjusted to compensate an adapter and SC termination for flat wrapped phase of s11 response . Wrapped phase is a convenient display as it does not flick between + and – 180 due to measurement noise, but the normal (or wrapped) s21 phase can be used as shown in the later NanoVNA screenshot.

The NanoVNA was OSL calibrated out the outside of a SMA connector saver permanently attached to the Port.

To measure the cable with N connectors, an N(F)-SMA(M) adapter was attached, and a precision N(M) short attached to that adapter. 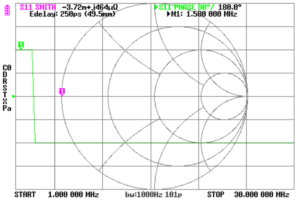 Above, the green trace displays phase of s11, and e-delay was adjusted until it was flat at the higher frequencies. This provides a fairly good calibration for the fixture offset and the reference plane is now the SC plane in the precision N(M) short, which is 9mm outside the N(F) reference plane.

Having calibrated the fixture, a precision N(F) short was attached to one end of the cable, and the other end attached to the N jack on the adapter on the VNA. 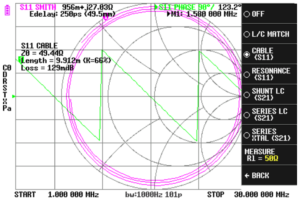 The reported 9.912m needs adjustment for the location of the reference planes, we expect it should measure 9.920m.

That would seem good enough for such a simple test.

The display shows Loss=0.128dB. What does this mean? Is it a calculation of matched line loss (MLL), at what frequency? It is about the number one might expect at the first quarter wave resonant frequency ~5MHz… but it is a number without context.

Results with cable sections using UHF series connectors, especially with loose coupling sleeves may not be as reliable. The loose collar will cause unpredictable / unreliable results, install a UHF(F)-UHF(F) adapter to fix the problem. Likewise for plugs of similar construction (eg SMA).