Class-E RF power amplifiers have become quite fashionable in ham radio in the last decade or two.

This article discusses a common issue with the design of the RF choke providing DC to the Class-E stage.

Above is a circuit above is from (Sokal 2001) which explains the amplifier and gives guidance on selection of components. One key recommendation is that the usual choice of XL1 being 30 or more times the unadjusted value of XC1. This spells out that L1’s role is essentially an RF choke, it is intended to pass DC but to largely prevent RF current, it needs a high impedance at RF, and low DC resistance.

Let’s estimate a design value for the choke’s DC current for a PA specified for 5W out at 13.8Vdc.

Before even considering whether 200µH is correct or adequate characterisation, lets focus on the DC current, #43 material characteristics, core dimensions and B-H curve. 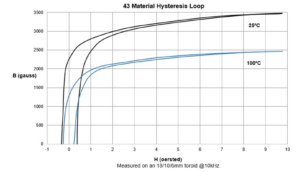 The calculated magnetising force is off the scale to the right, the core is fully saturated and some.

At saturation, the inductor will not have the RF impedance needed for the application.

A prudent limit for H considering some small temperature rise in operation might be 0.6Oe or 50A/m.

A better approach is to design for Bmax, and a value of 2000gauss or 0.2T would be appropriate. 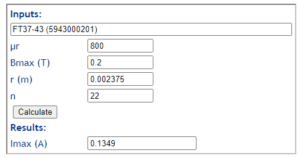 Above is a calculation of maximum current for Bmax=0.2T, Imax falls a long way short of the 0.6A design value.

So, the single FT37-43 inductor seems quite flawed, it is unlikely to withstand sufficient DC component of current to deliver most of its design RF impedance.

Mosaic published a LTSPICE simulation of a Class-E PA design for 3.5MHz. It appears to be a detailed and valid simulation, so let’s use it for a quick path to explaining the role of the RFC. The simulation provides a convenient way of showing currents that can be very hard to measure in practice.

Above is an extract of the simulation schematic. Note L4, the RFC feeding DC to the output stage. It is 80µ and has |Z| of 1800Ω, a relatively high impedance. 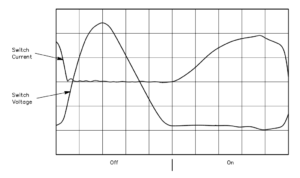 The above figure from (Sokal 2001) gives advice on the expected current and voltage at the low order Class-E switch. 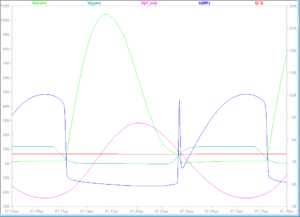 Above is a plot from the simulation showing:

Note that the RFC current is almost steady DC, there is in fact 0.06App ripple, but if the RFC is effective as such, then the ripple current will be very small.

Note that there are designs published (eg QCX) where the DC feed inductor is not a high impedance itself, it is not of itself an effective RFC, and the current will not be as shown above for an effective RFC.

So, to design an effective RFC, we must design a component of:

Note that that all these things need to be delivered with commercial tolerance components, it is not proven by apparent operation of a single prototype alone.

This section applies to Fair-rite 2843000202 cores, and measurements were of Fair-rite product. These cores are often sold as BN43-202, but be aware that other manufacturers pass off cores as #43 material thought they may not be exactly comparable. For example, Amidon’s current #43 datasheet appears to be National Magnetics Group H material. 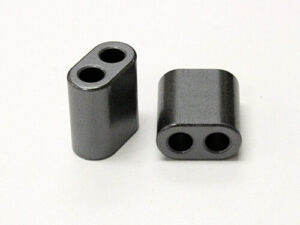 Firstly, since the application has a significant DC component of current, we need to check for magnetic saturation.

You may see in datasheets, Bsat specified as 300mT, but for #43, that is the absolute maximum B in full saturation at 25°, it is lower at higher temperatures, and the maximum usable (meaning most of the design impedance is still available) B is more like 200mT (look at the B_H curves, and allow some margin for tolerances).

At a fundamental level, we can write \(L=n\frac{d \phi}{di}\). If the operating point due to DC bias is so far up the BH curve that flux hardly changes with change in current, the inductance has been reduced greatly. 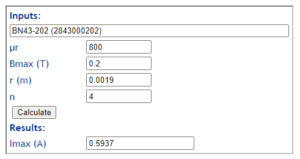 Iteratively, it was found that the most turns for acceptable Imax was four.

Next question is that sufficient at RF?

A reminder that the driving waveform is not sinusoidal. 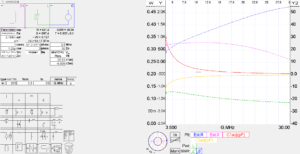 Above is a Simsmith model for the inductor with an informed guess for Cse. If the design was inspired by (Sokal 2001), it also includes calculated corrections for C1 and C2… which are quite small due to the high equivalent shunt inductance of the inductor.

Core loss is calculated for 20Vpk applied, and it is very small, around 130mW.

Note that the calculated temperature rise is for average power dissipation of 130mW and there is considerable thermal latency in ferrite cores, it may take many minutes to approach that temperature rise. 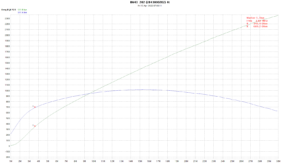 Above, measured R,X for the prototype look good… let’s compare them to the estimate and calibrate the model. 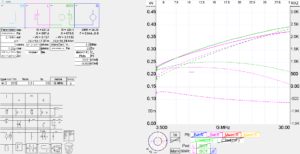 Above is the model extended to compare the model estimate with measured impedance. It is quite good (within the tolerances of ferrite materials and the model), and it turned out the experienced guess at Cse was right on the money. 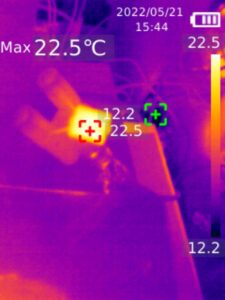 Above is a thermograph of the test in free air of the RFC with the same RF voltage at 3.5MHz as that impressed in the real transmitter application. Temperature stabilised after 2m, temperature rise is 22.5-12.2=10.3°, a little lower than expected but within tolerance.

The next, and necessary step, is to try a prototype in the application circuit… though I do not have the transmitter and will not be doing that.

There seems a consensus in the design of the RFC for several projects, but none discuss the magnetic design and in particular saturation calcs. WB2CBA’s ADX specifies 20t on FT37-43. Dan Tayloe N7VE has a design using different number of turns on different bands, 12.5t on FT37-43 for 2.25W on 40m (Q: how do you wind 0.5t on a toroidal inductor?), so lower turns and lower current.

This article is not about a somewhat similar design that uses 24t at 80m on a (powdered iron) T37-2 (eg QCX). It has very high Imax (much higher than needed), but it has much lower RF impedance than the options discussed above, and that may be an issue.