This article is part of a series discussing inductors, their characteristics, and measurement, continuing from NanoVNA-H4 – inductor challenge – part 5. The previous articles have discussed these matters in the context of an air cored solenoid, this article moves on to inductors with a magnetic core.

The B-H curve relates flux density to magnetising force, and as mentioned, the underlying material is non-linear and exhibits saturation (where at some point, B increases very little for increased H). 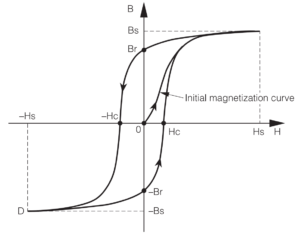 Above is a generic BH curve for magnetic core material. It shows saturation and hysteresis. Note that saturation (Bs) is total saturation of the core, but saturation begins at half that flux density in this case.

Techniques to work around some of these characteristics include alloying of the material, lamination, powdering / sintering, and air gapped magnetic paths.

Ferrite cores offer more extreme examples and are in common use, so will be discussed as a vehicle for exploring the issues.

Ferrite is a ceramic like material that exhibits ferromagnetism, it may have hight to extremely high resistivity (differently to iron, laminated steel, and powdered iron), has relatively permeability from single digit numbers to thousands, and exhibits low to very high core loss.

You might think all this makes it pretty unattractive, and lots of pundits claim so, but it is an option that can be very effective in many of applications.

Sometimes the distinction is made by some ‘experts’ that ferrite is not suitable for “resonant applications”, or not suitable for “transformers”, that it is a “suppression only product”, but better to set those notions aside and approach ferrite with an open mind discovering and exploiting the characteristics are suited to different applications.

A good model to account for ferrite core loss is to use a complex quantity for permeability, and the imaginary component gives rise to an equivalent resistance in series with the reactance. The permeability components are also often designated µ’ and µ”, \(\mu_r=\mu^{\prime}-\jmath \mu^{\prime \prime}\).

Ferrite permittivity is different to those of a vacuum or air which influences electric field distribution.

Ferrite cored inductors exhibit all of the effects discussed with the air cored solenoid, and additionally the frequency and temperature dependence of complex permeability, and these combinations and influences vary widely for different inductors.

So again, it is wise to think of a ferrite cored inductor as a resonator in the general sense, and apply simpler models where they are adequate approximations for the application at hand.

Even more so than in the case of the air core solenoid discussed earlier, the specification of a ferrite cored inductor as simply an inductance value is pretty naive if it is intended to be used at frequencies where µ’ varies with frequency, or µ” is significant.

It is commonly the case that ferrite cored inductors used in continuous wave (CW) applications above 1MHz will overheat (even to the Curie point) long before flux density reaches saturation, and so saturation tends to be ignored in design calcs.

This assumption needs to be tested for each application, and is less likely to apply for pulse or other low duty cycle applications. More importantly, if there is a non-zero DC component of current /  magnetising force, saturation may occur.

Be aware that measurement of the inductor with most instruments does not approach saturation, and it takes more complicated test setups to safely measure impedance with a DC current bias applied.

There is a plethora of ‘inductance calculators’ that purport to give valid results, not just for air cored solenoids, but for magnetic cored inductors including powdered iron and ferrite in various shapes and materials.

I will simply say, use with caution, it is my experience that most are not to be trusted. The ‘net being what it is, the fact that two calculators might agree is not evidence they are valid, they may simply have common heritage.

It is often the case that popular tools are popular because they are popular, and they need not be valid to be ‘liked’.

There is no substitute for understanding basic Electricity & Magnetism.

Magnetic cores add another level to the complexity of inductor design and measurement.

Common materials used for RF inductors are powdered iron and ferrite in various formulation, none are ideal materials, but informed design work can produce components well suited to application.