The other property of an inductor that if often sought is the Q factor (or simply Q). Q factor derives from “quality factor”, higher values of Q are due to lower resistance for the same inductance… so you might regard them as a higher quality inductor, lower loss relatively, and in resonant circuits, higher Q inductors yielded a narrower response.

Let’s visit the Q factor and measurements / plots of Q.

Q factor derives from the work of Kenneth S Johnson, the term having been formally used in 1920 to refer to the ratio of reactance to effective resistance of an inductor.

Though initially used in the context of an L-R circuit, it quickly gained wider application.

(Terman 1955) gives a more general definition of Q that is widely accepted:

BW=ResonantFrequency/Q. This is a well known relationship, and can be used to find the Q of a component by resonating it with a very low loss capacitor finding the half power bandwidth when driven by a constant current or constant voltage source as appropriate.

For a practical air cored inductor well below SRF, it was stated earlier that \(X \propto f\) and \(R \propto \sqrt f\), the latter is by virtue of skin effect. It is a first approximation, and does not account for proximity effect that becomes more significant where the space between turns is less than the wire diameter. This simple model is used in lots of analysis tools.

Measuring R and X for high Q inductors is a challenge, especially for low end VNAs, and there are other issues of the measurement fixture which all cause noisy measurement results, so for clarity, this article uses a mathematical model.

The accuracy of the Simsmith models is a little affected by the step size of the frequency increments used. We do not need to obsess over this, the answers are very close to ideal and demonstrate the behavior being discussed.

Q of a non-resonant circuit 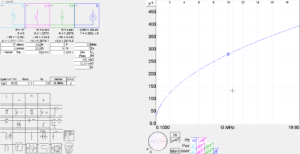 That is all good. This looks like we can infer Q from Z over this frequency range (assuming that the inductor does not exhibit a self resonance, ie Cse=0).

Q of a resonant circuit

Now let’s resonate that 20µ inductor with Q 283 at 10MHz with a lossless capacitance… so circuit Q is unchanged. 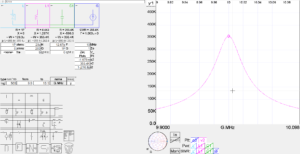 Above is the voltage response when it is driven with a constant current source. We will move the cursor off resonance to find the lower half power point. 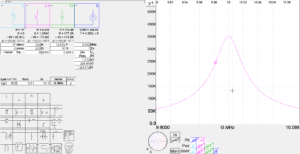 Let’s calculate Q inferred by Z for the resonated circuit, \(Q=\frac{|X|}{R}\)… this is how VNA Q plots are often calculated. 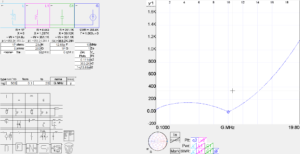 Q of an inductor near self resonance

We established earlier that the test inductor could be characterised as having an equivalent shunt capacitance of 1.336pF to ‘explain’ the measured self resonance at 30.8MHz. 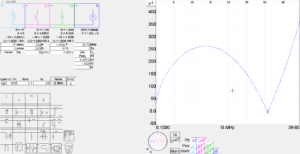 Above is a Simsmith model of that equivalent circuit modelled up to 40MHz. Just as in the case above of a resonant circuit, the Q inferred by Z for the self resonant circuit by \(Q=\frac{|X|}{R}\) is wrong above about SRF/5.

The fundamental definition of Q is in terms of energy, higher Q implies a lower loss inductor.

Characterising an inductor as having certain inductance and Q is rather meaningless unless the frequency is also specified.

Just as the case where deriving L from inductor Z is unsafe, so it deriving Q from inductor Z by \(Q=\frac{X}{|R|}\) as is often done in VNAs (though both may be acceptable well below SRF).