NanoVNA-H4 – inductor challenge – part 2 showed how to approximately undo the transmission line effects of the measurement fixture to improve accuracy of measurement of the coil end to end.

Let’s look at the impedance plot at the coil ends. 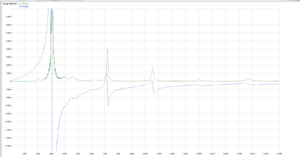 So, it is clear we have a device with multiple resonances… a resonator in broad terms and representing it as a fixed inductance in series with some small resistance is quite inadequate for the frequency range above.

Above, we have also shown that the simple model of the inductor as a pure inductance is inadequate above about 5MHz (about 15% of SRF) in this case.

Can we improve on this?

Let’s digress for a moment and explore a very simple parallel resonant circuit with Simsmith. 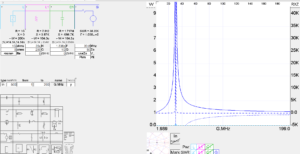 Above is a model of a 20µH inductor (being pure inductance in series with some resistance implied by the Q parameter) in shunt with a 1.336pF capacitor. Note the impedance plot, the SRF reconciles exactly with the measured value for the real inductor.

Note also that this circuit has a single parallel resonance (anti-resonance) in the range 1-200MHz.

Could such a model be used to better explain the test inductor?

Let’s compare that with the measured impedance of the real inductor. 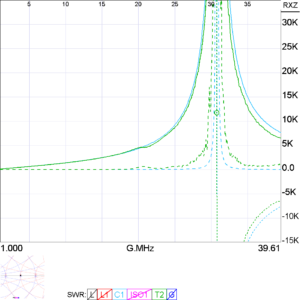 Above, zooming in on the range 1-40MHz we see that the model of an inductance with some series resistance, all in shunt with some equivalent capacitance yields an impedance plot that is quite close to measured up to about 35MHz, just a little above the SRF in this case. 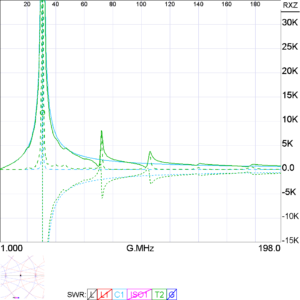 So, whilst adding a shunt capacitance gives us a model that is useful to a little over SRF in this case, the plot above shows that it (cyan) does not predict the higher order resonances of the real inductor (green). It is a better model at some frequencies, but not a complete model.

It is common belief that this shunt capacitance can be calculated from the physical coil dimensions, the term “sum of inter turn capacitance” is often used, but attempts to predict SRF on that basis have not been good.

It is better to think of the capacitance as an equivalent shunt capacitance that accounts for SRF in a model to predict impedance of the inductor up to about SRF and perhaps a little higher.