His measurements are of interest as there is a dearth of credible measurement data for these types of lines below 50MHz.

The line of interest is described as:

This US manufactured line consisted of two 18AWG (1mm) copper-clad-steel conductors with black insulation spaced 0.85″ apart – similar to Wireman 551. The “windows” occupied about 40% of the length.

The line measured was Copper Clad Steel so can be expected to have higher loss than copper at lower frequencies where copper thickness becomes less than three skin depths. The nominal copper thickness of single core #18 (1mm) 30% CCS is 66µm, which is more than three skin depths above 9MHz, so one would expect copper like performance above 9MHz, and gradually degraded performance below that frequency.

The results given in Test 7 are for dry line . 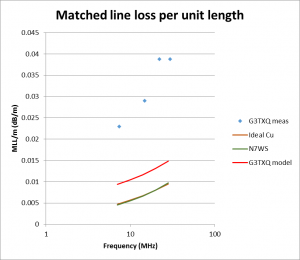 The plot above compares G3TXQ’s measurements adjusted to dB/m with:

G3TXQ’s “Net Loss” figures and Matched Loss model do not reconcile with each other, or with expected Matched Line Loss for this type of line.

In searching for a possible explanation, consideration has been given to the possibility that “Net Loss” includes the effect of standing waves. An approximate correction for the loss under standing waves can be made by dividing the reported Net Loss measurements (adjusted to dB/m) by (1+VSWR^2)/(2*VSWR). G3TXQ directly reports VSWR=9 with a 50R load, but also measured Zo around 370R which is inconsistent. N7WS’s estimate of Zo of about 400R is used to calculate VSWR=8 for backout of standing wave effects on loss. 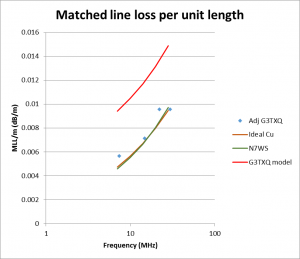 An attempt to fit the four adjusted data points to the model MLL=k0+k1*f^0.5+k2*f gives best fit to MLL=1.89e-6*f^0.5 dB/m where f is in Hz. There is not sufficient evidence in the data points to support the hypothesis that k0 or k2 are non-zero.

The bottom line though is that the writeup of G3TXQ’s experiment and Test 7 results is unclear, they are inconsistent, and so defy clear interpretation.

This article makes no comment on other measurements reported in G3TXQ’s article.