It has been my experience over more than 50 years that accurate measurements using SMA connectors requires that they be torqued to a consistent and adequate torque. Specifications for brass threads commonly runs around 0.6Nm, and I have a torque wrench calibrated for that torque which I use whenever the connectors are to be properly tightened.

In my NanoVNA-H v3.3, I reinforced the SMA connectors because of a sense that to tighten them to 0.6Nm (5.3inlb) caused the board to flex and over time might crack the tracks (Strength of reinforcement of nanoVNA-H connectors).

Joe Q Smith has an interesting video where he tests some Chinese SMA connectors to destruction, worth watching: NanoVNA Torquing SMA Connectors . In his tests, he needs upwards of 2Nm to damage the cheap Chinese end launch PCB connectors, more than three times the torque I use.

About 6 weeks ago, I took delivery of a new NanoVNA-H4, which as far as I can tell, is a ‘genuine’ Hugyen product.

I did not reinforce the connectors on my new NanoVNA-H4 because there was not the needed clearance for a similar adequate brass bar inside the case.

So, having used a torque wrench at 0.6Nm in the few weeks that I have owned the NanoVNA-H4, the connector on Port 1 failed. 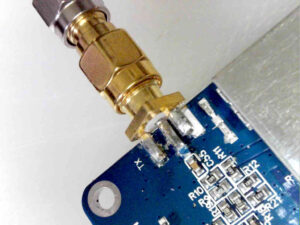 Above, the failed connector has rotated, shearing two of the support pins and tearing the other two off the tracks. 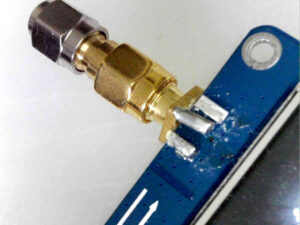 Above, a closer view of the failure. 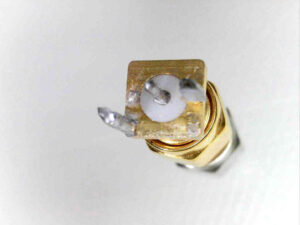 Above, a view of the connector once removed from the PCB. Note that two of the square pins have sheared cleanly which I think questions the strength of the metal from which the connectors are made, particularly the shear strength. The pins that sheared are those pushing against the PCB due to 0.6Nm tightening torque on the attached load. The other two pins were pulling away from the PCB and cause the solder to fail in tension. 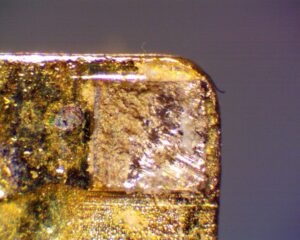 Above, a close up view of one of the sheared pins. 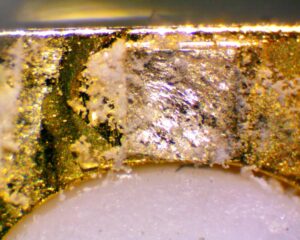 Above, a close up view of the other of the sheared pins.

Given that joeqsmith’s video included test at excessive torque of connectors not even soldered to the PCB, it becomes clear that the metal used in the connectors on my NanoVNA have sub standard shear strength.

Since it is very likely that the Port 2 connector is made from the same metal, repair involved removal of both connectors, clean up of the PCB, and fitting two new connectors.

Time will tell if the repair is fully effective.

I took advantage of the opportunity to bond the two SMA connectors. 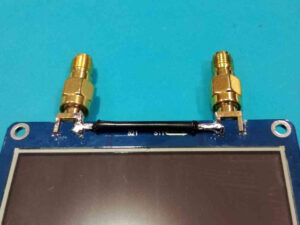 I have seen the online discussions relating to doing the equivalent to my NanoVNA-H, and in neither that nor this H4 have I measured degradation… but there is an advantage to knowing that the two SMA outers are more approximately equipotential.

Update: three months after the repair (replacing both connectors) and a lot of use of the NanoVNA-H4 using the same torque wrench, there has not been another failur, the repair appears effective. The replacement connectors were Chinese parts from RFSupplier, and apparently better quality than those used on the ‘original’ H4.