Often one finds that a cartesian plot of the components of admittance (conductance and susceptance) would be a convenient plot in understanding / solving a problem.

Let’s work through an example of designing an antenna shunt match to illustrate.

The example is based on measurement of the feed point impedance of a real antenna, an M40 1.2m long vehicle mounted helical whip for the 40m band. 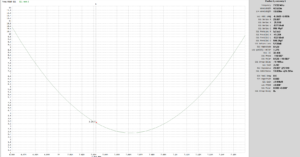 Above is a plot of the VSWR. The minimum VSWR is a bit high, let’s drill down on it. 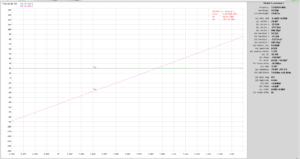 Above is a plot of the feed point impedance R+jX. We can see that R is almost independent of frequency over this range, but X varies quite quickly with frequency. By itself, this plot does not really help with design of a shunt match, other than to realise that R<50, so it is a possible candidate.

What we really want is a view of admittance, but like most ham software, the closest thing in NanoVNA-App is a plot of the equivalent parallel R and X, Rp||jXp. 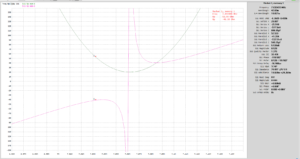 Above is a plot of Rp||jXp (though standard NanoVNA-App labels this plot Rp+jXp… but the + operator is quite wrong).

We are interested in finding the frequency where the feed point appears to be 50Ω resistance in shunt with some reactance. This marker is near such a point, near because it is located at an actual scan point.

Let’s look at an admittance plot. 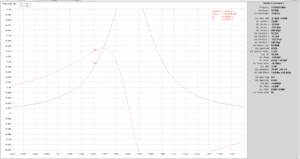 We are interested in finding the frequency where the feed point admittance appears to be 1/50S conductance in shunt with some susceptance. This marker is near such a point, near because it is located at an actual scan point.

So, looking at the extended info panel, the feed point looks like Y=0.019+j0.024S, and the equivalent parallel inductance is -932nH, so a shunt inductance of 932nH will offset that and deliver a near perfect match.

Some other changes have been made, including a Return Loss graph. 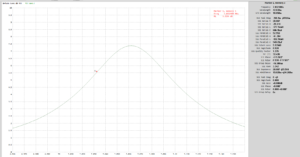 Above, the Return Loss graph for this scenario.