Over more than 50 years, I have measured literally thousands of RF inductors and transformers. This article gives some hints and techniques for making / preparing prototypes for measurement, and measurement.

RF inductors and transformers will often use enameled copper wire (ECW) or some form of insulated wire or coax.

Solid core LAN cables are a good source of small insulated wire for prototyping. The conductor is around 0.5mm, and overall about 0.9mm. 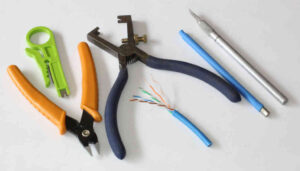 Above, from left to right:

The LAN cable stripper is a quick and convenient way to strip the jacket, though you will probably need to strip 300mm or so at a time to strip a longer length. This is not for stripping individual wires, that slotted piece of metal at the end of the tool is a cheap 110 punch down tool.

The LAN cable un-twister is a convenient way to untwist the individual wires of each pair. CAT 5 and later cables are quite tightly twisted, and tedious to untwist otherwise.

The Xacto knife is quite good for stripping the insulation from enameled copper wire. Polyurethane enamel is convenient (it can be melted off and tinned with a very hot soldering iron), but I also use wire that requires scraping the enamel off, and this tool allows scraping even very small conductors without nicking them badly. 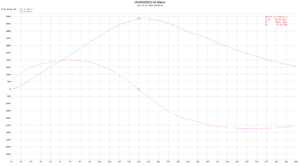 Above is a plot of measured impedance (using NanoVNA and s11 reflection) of the inductor with 50mm leads, and the marker is located at the self resonant frequency (SRF) (ie where X passes through zero). The SRF is 14.06MHz. 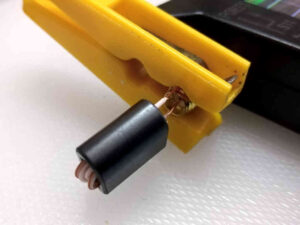 Above is the six turn inductor with 10mm leads. The wires are stripped and one 0.5mm conductor is poked into the female centre of the SMA connector on the VNA, and the other stripped wire is clamped against the male threads using a plastic clothes peg. 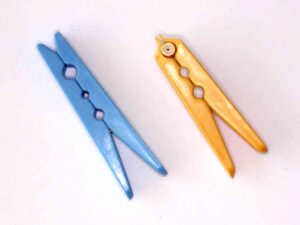 A later and improved version intrudes into the test area less. 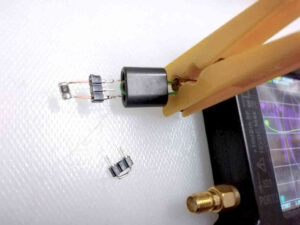 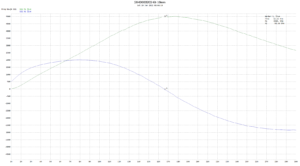 Above is a plot of measured impedance (using s11 reflection) of the inductor with 10mm leads, and the marker is located at the self resonant frequency (ie where X passes through zero). The SRF is 16.66MHz, quite a bit higher than with the long wires. We can use this value to calibrate a model of the inductor. 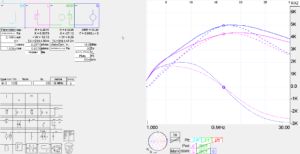 Above is a comparison of measured impedance and an estimate of the impedance of the inductor based on published material characteristics, turn count, and equivalent shunt capacitance calibrated to the measured SRF.

Note that the tolerances of ferrite are quite wide so you will not get an exact reconciliation, the above is pretty good.

Example 2 is a small Ruthroff 4:1 balun. 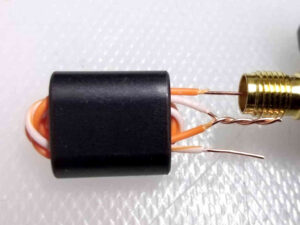 Above is a 2843000202 (BN43-202) core with three turns bifilar using a pair stripped out of CAT5 cable. The wires were bent so that there is a substantial pressure on the connector parts when inserted like this, so that there is a good connection (we are measuring DUT of hundreds of ohms here). This measurement will allow determination of the self resonant frequency of the transformer.

To improve the quality of the connected to the SMA outer conductor, I often use a zip tie to hold the wire tightly against the SMA threads. This is necessary if you are measuring a low impedance. Another option is a plastic clothes peg (as used earlier) to hold the wire in good contact with the threads.

The white board is an ordinary kitchen PE chopping board sitting on spacers above the bench to isolate the DUT from other conductors. In some cases, you may need to suspend the DUT above or below the VNA, but for this measurement, the configuration used is fine.

It is important that the connecting wires are short. Try doing this with 100mm connections and save the scan files, then halve the lengths, measure and compare. If the measurement changes significantly, the wires were too long, and they may still be too long… iteratively halve them again and observe. 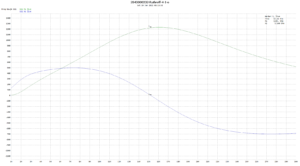 Above is a plot of measured impedance (using s11 reflection), and the marker is located at the self resonant frequency (ie where X passes through zero). We can use this value to calibrate a model of the transformer. 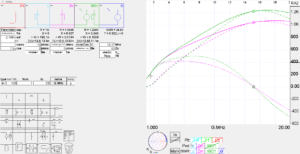 Above is a screenshot of a model of the transformer in Simsmith. This model plots both the expected impedance (magenta) and the measured value (blue). The value of equivalent shunt capacitance cse has been adjusted to calibrate the self resonant frequency with that measured above. The self resonant frequency is very sensitive to the value of cse, and long connection wires will give a very different measured value and cse. Note that ferrite core material is subject to quite wide tolerances, you are unlikely to see exact reconciliation, this example is quite good. 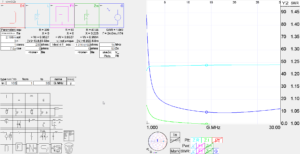 Having calibrated the model, we can estimate the input impedance and VSWR if the transformer were loaded with its nominal impedance. In this case, InsertionVSWR is 1.2 or better from 1.8-30MHz. 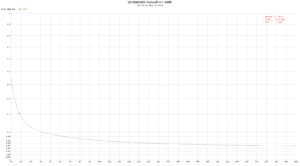 Above, the measured InsertionVSWR is just a little better than the design estimate, it is better than 1.2 from 1.8-30MHz. 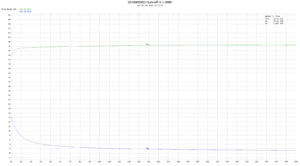 Above is a plot of the measured impedance with a 200Ω load. 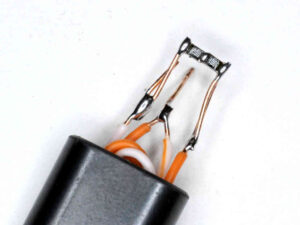 The load is two 0805 100R 1% resistors in series across the balun output. (The code on the 1% resistors is 1000 and means 100 x 10^0=100Ω.) Measurement was made with the centre wire attached to the SMA outer, and the partially hidden wire on the left side connected to the SMA female pin. Make sure solder flux is cleaned from the wire before poking it into the SMA connector. 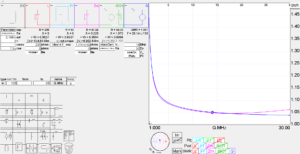 Above is a comparison of predicted (magenta) and measured (blue) InsertionVSWR using Simsmith.

It is easy to lose count of turns. I use a tally counter to keep count. It is possible to so a simple check of inductance at low frequency to verify turns count, so if you lose count, put a few extra turns on, measure and remove as needed to fix up… but it is better to keep count accurately as you wind. You do not need hardware to count, use pencil and paper to record tally marks, eg   || for 12 turns.

For binocular cores, one turn is a pass through both sides, a half turn is not exactly a half turn inductance and coupling wise.

For toroidal cores, one turn is one pass through the inside diameter of the core, there is no such thing as a partial turn. A common mistake is to not count the middle turn of a Reisert style cross over winding, it obeys the above rule and should be counted.

The lessons learned building and measuring small prototypes such as those above will guide you on making measurements of other and larger parts.

Successful measurement technicians need to play the devil’s advocate, to not trust things that are not proven / validated, to be scientific.