This article lays out a method for estimating the Antenna Factor of a short vertical mounted on the roof of a vehicle for use with a high impedance amplifier for ambient noise measurement at 3.5MHz. 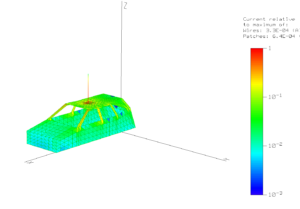 Ambient noise is commonly dominated by man made noise, and it often arrives equally from all directions. For measurement of such noise, the captured power depends on average antenna gain, and so the calculations below focus on gain averaged over the hemisphere.

Whilst it is easy to come up with Rules of Thumb or simple approximations for a short monopole over perfect earth conductor (PEC) either matched for maximum power transfer, or essentially unloaded, the case of a short vertical on the roof of a motor vehicle suspended above natural ground is not so easy.

So, the approach is to:

An NEC-5.0 model was created for a 1.215m (4′) vertical mounted on the roof of a motor vehicle at 3.5MHz. The model was derived from a sample model supplied with NEC-5, the vertical was lengthened and moved to mid roof, and the unused antennas deleted. The model was changed to introduced real ground (σ=0.005, εr=13). 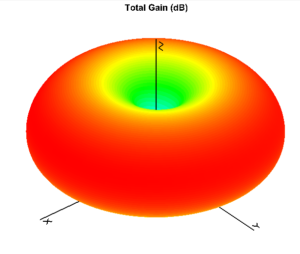 Above is a 3D pattern plot, the pattern is an almost omnidirectional donut. 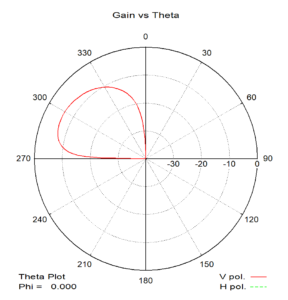 Above is an elevation profile. 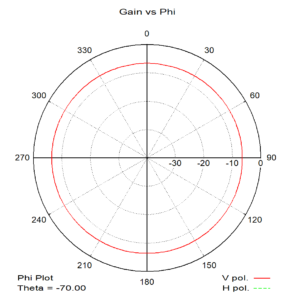 Some key values are extracted from the NEC output report. 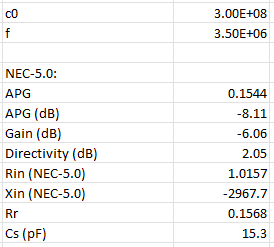 The calculated equivalent series source capacitance Cs is given for interest sake, it is not used directly here, but is often estimated for so-called E-field probe antennas.

Thevenin source voltage of a lossless isotropic antenna is found by calculating the available power to be captured by a matched antenna given the excitation scenario (E=1V/m). The available power is given by the product of the effective aperture Ae and the power flux density S (for E=1V/m). Ae is calculated from average gain (unity for a lossless isotropic antenna) and frequency.

Having calculated available power, we can calculate the voltage in a matched load, and the Thevenin source voltage Vth is twice that.

We are interested in the Antenna Factor when the antenna is loaded by the high impedance amplifier. The amplifier is approximated as some resistance Rp in shunt with some capacitance Cp.

Antenna Factor is given by \(AF=20 log \frac{E}{V_{in}} \text{ dB}\) where E is the electric field strength and Vin is the amplifier input terminal voltage.

AF is quite sensitive to Cp, efforts need to be made in circuit configuration, device selection, and circuit layout to minimise Cp and achieve optimal AF.

The above discussion is based on a unity gain amplifier, if otherwise, the gain in dB should be subtracted from the calculated AF to get AF wrt the amplifier output terminals (ie, the input terminals to the following receiver).