I have owned a NanoVNA-H v3.3 for more than two years now. It required some modification to fix a power supply decoupling problem on the mixers, reinforcement of the SMA connectors, replacement of the USB socket, rework of the case so the touch screen worked properly / reliably, and some minor works (eg battery charger chip, bad patch cables, faulty USB cable).

With recent enhancement of firmware to support an SD card, the prospect of stand alone use becomes more practical, so I set about researching and purchase.

It seemed the best option was to buy a ‘genuine’ NanoVNA-H4 v4.3, and I started the search at the recommended (by Hugen) store, Zeenko… but whilst there was a listing for v4.2, there was no v4.3 listing (perhaps it is out of stock). I did find another store selling what they described as a ‘genuine’ NanoVNA-H4 v4.3, but this is a high risk transaction, experience is that Chinese sellers are not to be trusted, and Aliexpress is an unsafe buying platform.

This is one of those concerning transactions where the seller notifies shipment and gives a tracking number hours before the deadline, then a week later change the tracking number (the ‘real’ shipment). 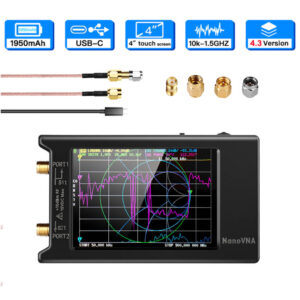 Above, the promo image from the listing. 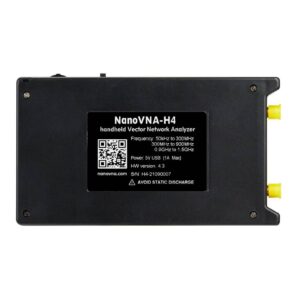 … and the rear showing the label and version.

In an online discussion, Hugen advised:

You can buy NanoVNA-H4 from the zeenko store. NanoVNA-H4 is now sold by zeenko in version rev4.3. 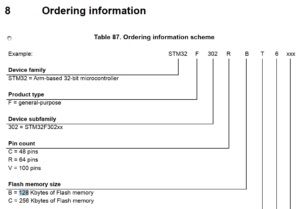 Let’s be clear, the datasheet for a STM32F302CBT6 specifies 128KB of flash memory. The question arises whether some chips used for production might appear to have 256KB, whether that memory is guaranteed, ie does it have some hardware defect that makes the higher memory unreliable?

The goods were received, and appear to be a ‘genuine’ Hugen NanoVNA-H4 v4.3. 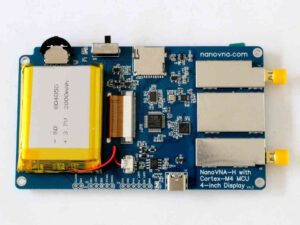 Above, the PCB is labelled v4.3 at lower right. 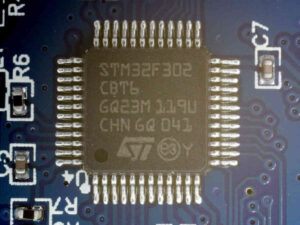 Above, the MCU is labelled as a STM32F302CBT6, differently to the published schematic which shows a STM32F303CCT6. The familiar bait and switch tactic.

The board uses a MS5351M synth chip, inconsistent with the published schematic. This appears to be a Chinese clone of the Si5351. The familiar bait and switch tactic.

The whole package was quite polished / well presented, as was the NanoVNA-H v3.3 that I purchased. On initial examination, it appears to work properly, I could slide a piece of paper between case and touch screen so it does not seem to have the problems that plagued earlier models where the screen did not work because of pressure from the case. The case markings are in line with convention (Port 1, Port 2 instead of Ch0, Ch1).

After a very quick checkout,  I update the firmware to DiSlord NanoVNA-H4 v1.1.00, and it appears to work fine, and quite like DiSlord NanoVNA-H v1.1.00, though I was now able to set the TOD clock and use the SD card to save screenshots and .sxp files (the most important reason for upgrading).

Initial measurement of s11dB (-ReturnLossdB) of Port 2 1-30MHz is that it is much better than my NanoVNA-H v3.3, and will be used initially without the additional 10dB attenuator on Port 2. SMA  savers were fitted to both ports. 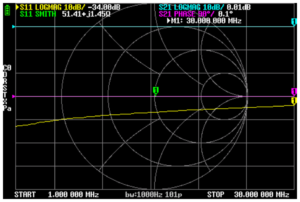 Above is a screenshot saved to the SD card. The screenshot is saved in BMP format, so I have a cmd file on the card which converts all .bmp files to .png (and resizes them to 200% and adds a 10px white border. 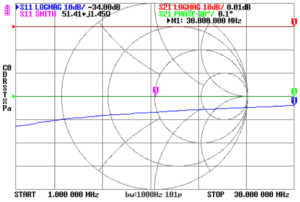 Above, my cmd file also spins off an inverted colour version which is better suited to printing and some online display. It would be a nice firmware feature to save the screenshot inverted (another soft button, a little code). 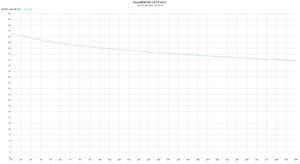 Above, Return Loss plot from NanoVNA-App.

The case fit-up around the SD socket is poor, it is very easy to drop the SD card inside the case, and quite inconvenient to extract it. I can see myself modifying this to make it harder to drop the card inside in poor light / difficult access positions. (This was fixed by cutting a small block of PVC to fit between the socket and the case lid to block the gap, and fixing it with VHB tape, and low quality case screws were replaced.)

Overall, I am very pleased with the goods received. The equipment itself is exactly what was advertised (save the inconsistency between published schematic and the chips actually used), the accessories appear good quality, DiSlord firmware is a huge advance on all earlier firmware versions, the SD card and RTC afford much greater potential for use stand alone.

One issue noted was that after some hours of operation, the combination seems to lock up, not responding to touch, the button or jog wheel. It does start working ok when switched off and repowered (at its power switch). After some extensive testing on a DC power supply (ie no USB serial port connection), it exhibits the lockup condition. Also noted is the same release of firmware for / on NanoVNA-H v3.3 locks up under the same conditions, which hints there might be a fundamental problem with the firmware, perhaps a memory leak.