About 10 years ago I purchased a 2500VA genset on eBay for about $250 incl delivery. It turned out to have wiring problems behind the control panel, and required an hour’s work to fit some new wires and terminations and make it safe. The seller refunded $80 as compensation. 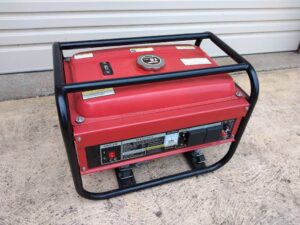 It has what appears to be a genuine Honda GX160. Now I bought it with I must say a great deal of skepticism, but having worked on many Chondas (Chinese Honda ‘clones’) this is undoubtedly a class above, and I think on all the evidence available, it was a Chinese manufactured Honda destined for the domestic market.

The engine has run very well, the only criticism is the sag in speed under full load, that indicates it is a little underpowered, a GX200 would be more appropriate (though a GX200 is sufficient to power a 3000W+ inverter machine).

A recent leak down test revealed a slight loss in compression, the principal leak being the exhaust valve. (These engines have an automatic decompressor on the camshaft, so old-syle compression tests are not valid, quite a waste of time… other that possibly revealing a broken decompressor.)

So… a gasket set was procured (actually 5 complete engine rebuild gasket sets for about $22 posted on Aliexpress… these are a lot cheaper to repair (in Australia) than Briggs & Stratton engines).

The head was removed (which means removing the fuel tank, extra large muffler and carburettor). 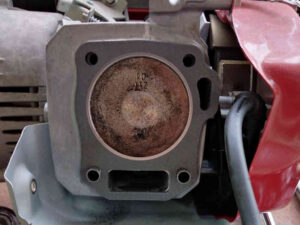 Above, the block after scraping carbon deposits off the piston, cleaning up and fitting a new gasket. 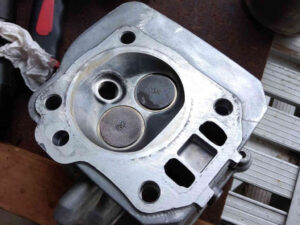 Above, the head after decarbonising with a small rotary cup brush, gasket removal, valve lapping, cleaning and reassembly.

The valve guides were secure, valve seats were excellent, the exhaust valve though showed small signs of erosion. I purchased a set of valves with springs etc for $12 on Aliexpress for ‘next time’. Compression was good after the valves had been lapped, the original issue was resolved.

The engine started on first pull, engine speed needed a small adjustment (the speed screw had been backed out for disassembly, then screwed back in to approximately the correct setting… but small trim needed.

This work took about two hours, a commercial workshop would not do it much quicker, so a commercial job with genuine parts would render the machine a write-off. Other options like a drop in engine replacement may not be viable as the alternator rotor is probably mounted on a tapered engine shaft (no other support bearings), and procuring an engine with that special shaft end may be impractical.

The frame of the genset used lots of punch’n’tap tabs with M6 screws. Three of the original 11 threads were stripped and the tabs backed with M6 nuts. 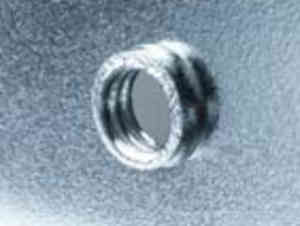 Above, a punch’n’tap thread. The sheet is extruded to typically about double thickness and tapped. In this case they were formed in softer steel and several were stripped by machine driven screws. 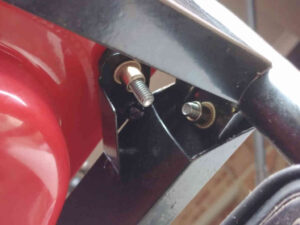 Above, the punch’n’taps were replaced with M6 rivnuts (nutserts) and a new set of 304 M6 serrated head bolts purchased to suit the deeper threads.

It was delivered with electrical faults as mentioned above.

When it was just weeks old, the die cast fuel cock  on the large fuel tank (non-Honda) crumbled into pieces.

Just months ago, the Keihin carburettor needle and seat, and bowl gasket were replaced (a casualty of E10 fuel some years ago).

It has been a very good machine, always starts easily, is very quiet (an oversized muffler is fitted), is a low technology machine, but reliable.