This article describes a method of measurement and adjustment using an antenna analyser or VNA to quickly set up a shunt match, a narrow band match (ie for one band, or even only part of the band).

The article uses Rigexpert’s Antscope as the measurement / analysis application, the techniques will work with other good application software.

To demonstrate the technique for matching such an antenna, let’s use NEC-4.2 to create 80m feed point impedance data for a 12m high vertical with 8 buried radials (100mm) and centre loading coil resonating the antenna in the 80m band for simulation of measurement data.

An s1p file was exported from 4NEC2 for import into Antscope, to simulate measurement of an example real antenna. 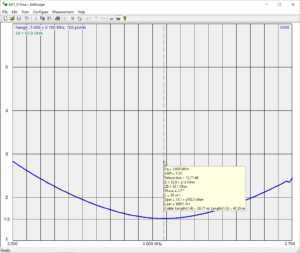 Above is the VSWR curve displayed in Antscope. Note that the actual response is dependent on soil types, antenna length and loading etc, but this is a good example for discussion. It is not real bad, another example might be better or worse. 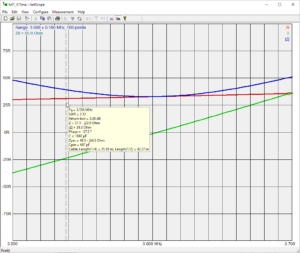 Above is a plot of the feed point impedance, ie the serial components of feedpoint impedance R and X. The possibility of a shunt match does not jump out, other that seeing that R<50. 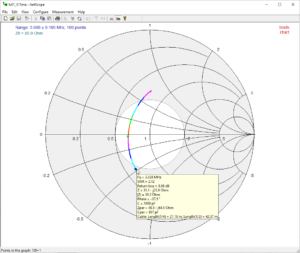 Above is a Smith chart presentation, and this is more revealing. We can ‘see’ that the curve crosses the undrawn circle where G=1/50S. It is undrawn probably because the software author did not foresee the utility of G circles etc.

Talking in hammy parallel impedance, the capacitive element of Zpar can be ‘tuned out’ by an equal but opposite parallel reactance, leaving Zpar=49.5… pretty much right on target. 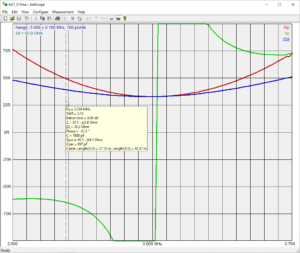 Above is a presentation of the parallel equivalent impedance components.

It can be seen that around the cursor, Rp is frequency sensitive, and at the cursor, Rp is almost exactly equal to 50Ω, so we just need to ‘tune out’ the parallel reactance with an appropriate inductor (one with X=64.5Ω).

This section shows simulation in Simsmith. 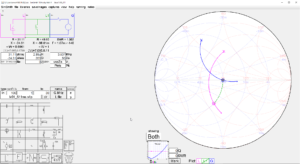 Above is a Simsmith model of the match. The s1p file is imported into the L element. The frequency is dialed to the point where the L element impedance crosses the G=0.02 circle, and the shunt inductor adjusted until the impedance at G is approximately 50+j0Ω.

In this case, a 2.9µH inductor could be prototyped as 10t of 2mm wire on a 38mm diameter form, stretched out to 33mm in length. (Design from Hamwaves RF Inductance Calculator.) 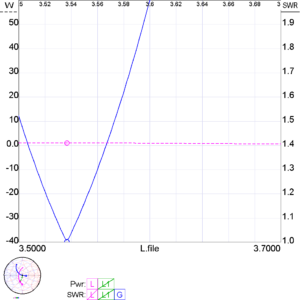 Above, the VSWR=2 bandwidth is about 130kHz.

Now the frequency at which we achieve this match might not be what we would prefer.

To do this, we go back to Step 2 and adjust the antenna (length; loading coil inductance, position; etc) to move the frequency where Rp≈50Ω.

Having done that, we calculate the inductance of the shunt coil, make a coil and measure / adjust to minimum VSWR at the preferred frequency.

Is there a briefer procedure?

The sweeps above were used to show what is happening in a wider context, but they are not essential. You do not need a scanning analyser… but scanning might well provide more confidence that the antenna is behaving as you assume.

You could simply set your analyser to display the parallel equivalent components at the frequency of interest, adjust the system to achieve Rp≈50Ω, note the required parallel opposite reactance, calculate the inductance of the shunt coil, make a coil and measure / adjust to minimum VSWR at the preferred frequency.