The article Another small efficient matching transformer for an EFHW – 2643251002 – #1 – design workup lays out the first steps in a design. This article documents bench measurements of a prototype transformer. 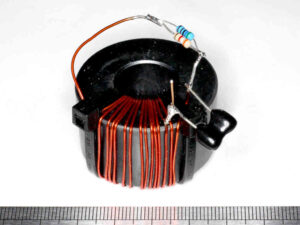 Above is the prototype transformer wound with 14t of 0.71mm ECW tapped at 2t. The mm rule gives some scale. The turns are close wound, touching on the inner diameter of the core.

Leakage inductance is the enemy of broadband performance, so it is important to minimise it.

Leakage inductance is affected by winding geometry. It is important to avoid opportunity for flux inside and around conductors that does not also ‘flow’ in the core, such flux does not ‘cut’ the other turns and is flux leakage. The winding should hug the core, so winding with wires with thick insulation, thick inflexible wires, and topologies like the Riesert cross over may compromise leakage inductance. High core permeability and high ΣA/l help to minimise wire length which helps in minimising flux leakage.

The transformer is configured as an autotransformer rather than separate primary and secondary windings to again minimise leakage inductance. 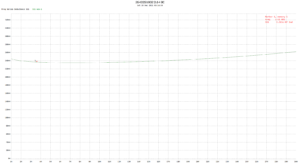 Above is a chart derived from s11 looking into the transformer primary with the 14t secondary short circuit showing the equivalent series inductance. The value will be taken as a total value of 236nH, or 118nH a side in the split model.

Note that the inductance at low frequencies is almost independent of frequency even though core permeability changes at these frequencies (see the #43 material data sheet), showing that, for the most part, leakage flux exists elsewhere than the core itself.

A simple model works quite well for predicting nominal load performance on low ratio transformers but less well for high ratio transformers, so best to proceed to measurement of the prototype with nominal load. A load was made from two small resistors in parallel having a combined DC resistance of 2480Ω, quite close to the nominal 2450Ω.

Measurement of the uncompensated transformer hinted that some 50-100pF was the likely optimum compensation capacitance. The transformer was measured with 47pF and it was under compensated, 100pF was perhaps more than needed but InsertionVSWR at the mid to high frequencies was not compromised so since there was a 100pF silver mica capacitor on hand, it was committed to the prototype. 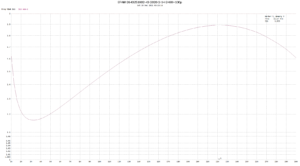 Above is a plot of InsertionVSWR with 100pF silver mica compensation. InsertionVSWR is less than 2 from 1-30MHz. As this type of transformer goes, this is a very good result.

Note there is some contribution of the connecting wires to this response, it is just not possible to use zero length wires to connect the secondary load circuit… but then that applies to its application circuit as well.

Loss modelling ignores conductor loss. Even though the conductors are relatively small, the effective RF resistance referred to the primary side is very low and insignificant compared to core loss. Compensation capacitor loss is modelled, Q=1000 assumed for the silver mica capacitor, but his can be quite a deal lower and very significant for ceramic capacitors. 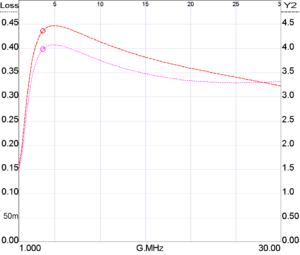 Above is a plot of the expected loss in dB, magenta on the left scale, and watts @ 50W continuous, red on the right scale. Maximum dissipation is less than 5W which should be accommodated within safe temperature rise for an unenclosed transformer.

Next step is to measure the transformer performance under power, capturing thermographs to confirm the predicted dissipation and power rating.