I purchased a Holzforma G372XT chainsaw, it is a Chinese clone of the now discontinued Husqvarna 372XP X-TORQ. It is a relatively new technology carburetted engine without introducing electronic auto tune, a 20 year old design. 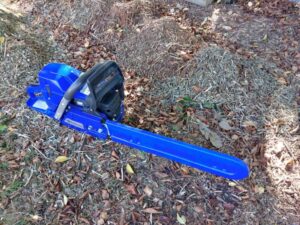 There are plenty of online discussions about the 372XP X-TORQ overheating, hot seizures, and pics of blued big ends, scored pistons and bores etc, so whilst the design achieves quite high power output for 71cc, one is warned to pay attention to mixture, fuel quality, and lubrication. This might be an engine that should not be used with other than full synthetic two stroke oil.

This article outlines out-of-the-box issues with the saw, basically all Chinese quality issues.

Recoil starter does not work properly

The cord would not reliably rewind into the starter. It turned out that this was not a matter of spring tension, but rather that the plastic spool jammed on its axle. A little reshaping of the sprint, a thin smear of grease on the axle, resetting the tension and checking that the cord runs out before the spring solved the problem.

Out of the box, it would not start.

Spark checked out fine (PET4000EC), lot of resistance to the pull cord, so it appeared to have adequate compression, so that left fuel as the issue.

I could not start it on 25:1, I eventually got it to start on 50:1 Amsoil Sabre but only after removing the spark plug several times and blowing the chamber out with compressed air, cleaning the plug in fuel and blowing it dry.

Now two strokes respond to a specific starting procedure, but this did not and it was flooding… probably due to the choke actuator coming off sometimes.

Proper functioning of the choke control is vital to starting of two strokes.

The plastic choke actuator snap fits falls to the lever on the carburettor, it was not securely retained on the choke lever and fell off far too easily.

This leads for flooding when the choke is not turned off when the actuator is pushed in. 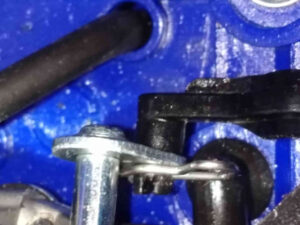 Above, the black plastic choke actuator was modified by drilling a 1.1mm hole and a 1mm 304 R-clip inserted to positively retain the actuator in the lever. The R-clip has to be of size and orientation that it does not interfere with other parts, eg the fuel tank hose grommet seen in this pic. The R clip can also be inserted from the front, but it needs the straight side down in both cases. A small cotter pin or bent wire are other options.

This might be regarded as a (Husqvarna) design issue, but in fairness, it is probably a matter of the quality of the plastic actuator, and the proper formation of the retaining ‘ears’.

The first problem was fixed by relieving the casting with a carbide burr.

The second problem was solved by turning up a 12x8x2 aluminium bush to space the pinion from the casing, and discarding the existing washer and o-ring. A new Chinese no-name tensioner was fitted, although its pinion was a different length to the Holzforma one, it had the same issue with the o-ring and worked well with the new aluminium bush mentioned above.

In the process, one of the screw heads sheared off on the first attempt was made to remove the tensioner, so both screws were replaced (M3.5×10 ST hex head) seen in the pic below. 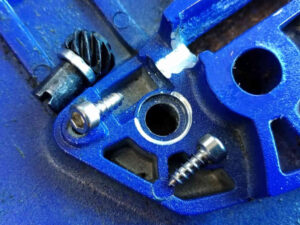 The pic shows the casing relieved to allow for the thread on the tensioner so that it does not bind, and the modified pinion assembly with aluminium spacer in lieu of the o-ring and thin washer. The pic shows where the original pinion scraped against the caser making the adjuster near impossible to adjust.

The chain catcher fell off after less than an hour’s use. Fortunately the parts were found and reattached more securely. I should not be surprised if threadlock will be needed, being monitored right now. 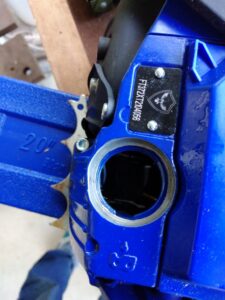 Above, the oil tank has been deformed and cracked by a severe blow near the edge of the cap, and the cap leaks. This did not happen in transit, it left the factory like this packed in a box. Repair of this is major, it means dismantling the saw completely and fitting a new half crankcase. This is Chinese Quality.

It seems from online discussions that Holzforma spark plug threads can be a problem, so the spark plug hole was helicoiled as preventative maintenance.

It seems Holzforma piston rings can be a problem, so the first time the top end is disassembled, the rings will be replaced with Husqvarna rings.

After three tanks of fuel

After three tanks of fuel, it starts reliably, runs well, appears to have plenty of power but has not been run much at WOT, but at mid range seems to hunt or surge between two speeds hinting less than smooth carburettor jet transitions. The carburettor needs review lest it runs lean in some condition… which could lead to hot seizure.

With a few hours use

Carburettor tuned to specification four stroking, max RPM is just shy of the Husqvarna spec (better under than over), still a relatively new chain and bar.

It starts reliably, it runs well so long as the tank is at least 1/3 full (otherwise it surges due to loss of fuel pickup), it is powerful though of course heavy as saws in this class.

It is a carburetted saw which is used at one location, so mixture remains optimally adjusted, none of the complications and risks of newer electronically tuned saws.

The fixes described earlier have been successful.