It seems that lots of hams find measuring the impedance of a common mode choke a challenge… perhaps a result of online expert’s guidance?

It helps to understand what we expect to measure.

See A method for estimating the impedance of a ferrite cored toroidal inductor at RF for an explanation.

Note that the model used is not suitable for cores of material and dimensions such that they exhibit dimensional resonance at the frequencies of interest.

Be aware that the tolerances of ferrite cores are quite wide, and characteristics are temperature sensitive, so we must not expect precision results. 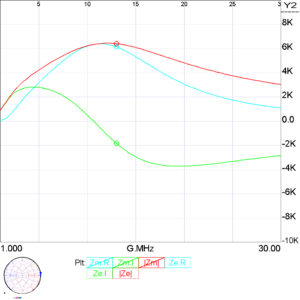 Above is a plot of the uncalibrated model of the expected inductor characteristic, it shows the type of response that is to be measured. The inductor is 11t wound on a Fair-rite 5943003801 (FT240-43) core in Reisert cross over style using 0.5mm insulated copper wire. 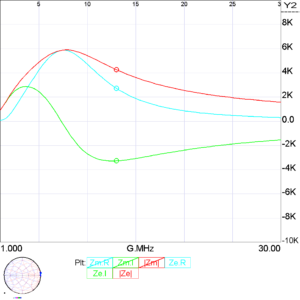 Above is the expected impedance of the same model, but looking through 100mm of lossless 200Ω line to demonstrate that connecting wires will substantially alter the measured impedance.

Make a measurement, then reduce the connecting wires to half length, if you see a significant change in the measurement then: 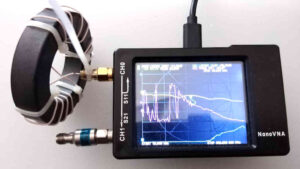 Above, one terminal is tied to the SMA threads with a zip tie, and the other wire poked into the female centre pin with a little sideways tension to ensure good contact. (Take no notice of the display, it is not locally calibrated, correction is performed in the PC client app.) 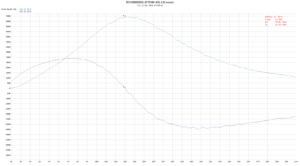 Above is a smoothed capture using nanoVNA-App. Note that the self resonant frequency (SRF) in this jig is 13MHz. We will use that to calibrate the predictive model in Simsmith.

This is the latest version of nanoVNA-App (v1.1.208), and it throws memory protection exceptions.

The measurements are an average of 16 sweeps (done within nanoVNA-App), there is a little measurement noise, but the results are quite usable.

The next step is to calibrate the predictive model based on measurement. The simplest calibration is to adjust the equivalent shunt capacitance to reconcile the predicted SRF with measured. In this case, the adjusted Cse is 1.48pF. 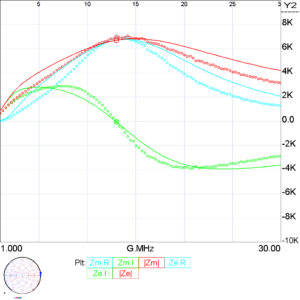 Above is a plot of the calibrated model (solid lines) and measured (circles) using a nanoVNA.

It reconciles reasonably well given the tolerances of ferrite cores. 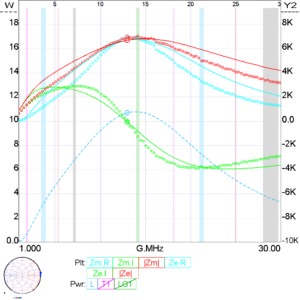 Above is the same calibrated model with the activation of a trace to show expected core loss at 40mA inductor (common mode) current. The core is unlikely to withstand more than about 40mA continuous current in the 14MHz band, a little more in the adjacent ones, depending on enclosure and ambient conditions etc.

The model can be adjusted to explore other configurations. 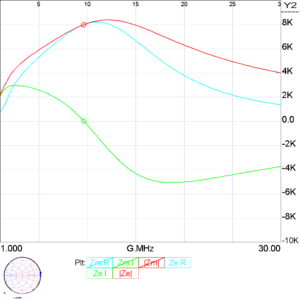 Above is a plot of the uncalibrated model of the expected inductor characteristic, it shows the type of response that is to be measured. The inductor is 13t wound on a Fair-rite 2631803802 (FT240-31) core in Reisert cross over style using 0.5mm insulated copper wire.

The next step would be to measure a real inductor, and adjust the model Cse calibrate the SRF.

… an exercise for the reader.

This article has described how to measure the choke as a component with very short leads. Packaging a choke into an enclosure introduces connecting wires etc, and measuring the packaged choke may present a greater challenge, but understanding the basic component choke is an important step in the design process.

Likewise for coming up with a realistic power rating given materials used, the environment, and intended use (duty cycle etc).