This article describes a Simsmith model for an EFHW transformer using a popular design as an example.

This article models the transformer on a nominal load, being \(Z_l=n^ 2 50 \;Ω\). Real EFHW antennas operated at their fundamental resonance and harmonics are not that simple, so keep in mind that this level of design is but a pre-cursor to building a prototype and measurement and tuning with a real antenna.

The prototype transformer follows the very popular design of a 2:16 turns transformer with the 2t primary twisted over the lowest 2t of the secondary, and the winding distributed in the Reisert style cross over configuration. 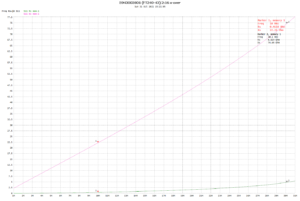 Above is a plot of the equivalent series impedance of the prototype transformer with short circuit secondary calculated from s11 measured with a nanoVNA from 1-31MHz. Note that it is almost entirely reactive, and the reactance is almost proportional to frequency suggesting close to a constant inductance. 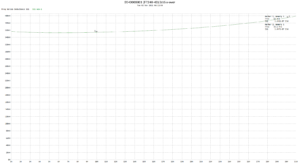 Above is a plot of the equivalent series primary inductance of the prototype transformer with short circuit secondary calculated from s11 measured with a nanoVNA from 1-31MHz. Note that the inductance is fairly independent of frequency, rising a little at the high frequency end probably due to effects of distributed capacitance and self resonance. This suggests that leakage flux is for the most part not immersed in the ferrite core, and it provides hints as to how to minimise it. 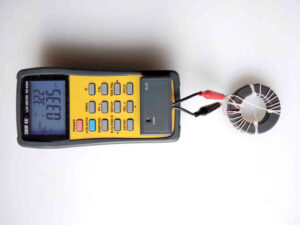 Above is the prototype transformer measured using a LCR meter, the measurement 335nH @ 100kHz is of the inductance at the primary terminals with the secondary short circuited.

Above is the equivalent circuit used to model the transformer. The transformer is replaced with an ideal 1:n transformer, and all secondary side values are referred to the primary side, eg \(L_{ls}^\prime=\frac{L_{ls}}{n^2}\).

A Simsmith model was built to implement the transformer model above.

Having measured the short circuit input inductance to be 350nH, it is distributed equally over Llp and Lls’ so Ll is entered as 175nH. 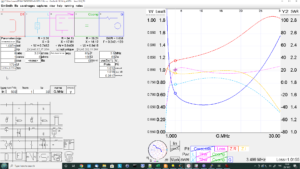 Above is a screenshot of the Simsmith model. Block D1 is used for data entry to supply some values direct and calculated to the following blocks.

Tfmr is the model of the transformer as shown in the diagram earlier. 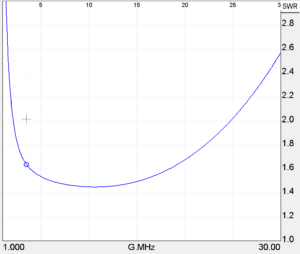 Above is the modelled VSWR response of the compensated transformer on a nominal load. It is not brilliant, but might be acceptable to many users. 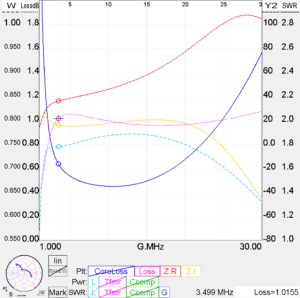 Above, drilling down on more detail, the \(Loss=10 log \frac{PowerIn}{PowerOut}\) curve is troubling. 1dB loss @ 3.5MHz means that only 74% of the transformer input power power reaches the transformer output terminals, the deficit being lost mostly in heating the ferrite core. Of course you transmitter might not develop its rated power into the load that it sees, there could be a further reduction in power output.

So despite its popularity, this is an appalling design. It has high loss due to insufficient turns, and high leakage inductance due to winding layout and high turns. Acceptable designs are a compromise between bandwidth and loss for a give core, and small is beautiful from the transmission parameters, but not for power handling.

Try changing model parameters in the sample model (link below), change mix type, measure the leakage inductance for some different winding configurations and use it.

The model does not give a definitive design, but it does help to explore the effects of magnetising admittance and leakage inductance on VSWR bandwidth, loss etc.