A recent online discussion tried to advise on the need of a common mode choke on a UHF Yagi. 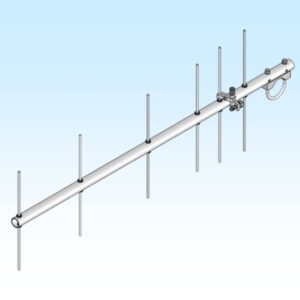 Above is the subject M2 440-6SS, 420-450 MHz Yagi deployed in vertical polarisation (using the other pair of holes for the U bolt).

Now I am a little intrigued as the pic would suggest that the DE is not electrically bonded to the boom, but passes through insulating bushes on each side without direct connection from the centre of the DE to the  feed point shield terminal. If so, it is not what is commonly known as a Gamma Match, but a variant.

The assembled experts were divided on the need for a common mode choke, and several online experts decried gamma matches as the cause of woes, one poster citing a presentation by Ian White which does some hand waving about gamma match.

The first point I would make is that if the coax shield is well bonded to the boom at the feed point connector, and zip tied to the boom and masting so as to preserve physical symmetry what might be seen as common mode current on the coax is more generally current flowing on the combined coax shield and conductive boom / masting. Let’s look at a NEC model of a 144MHz gamma matched 4 element Yagi mounted vertically 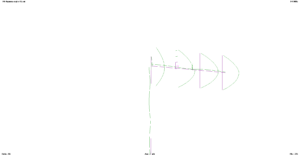 This model does not include the coax, but we can see than currents flow not only on the Yagi elements, but also on the boom and masting.

Let’s get rid of the ‘nasty’ gamma match. 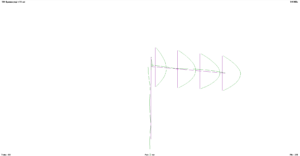 Well, that is not a whole lot different. The problem is not the gamma match!

What is the problem?

We could model this without the conductive mast and feed line, and find that there is negligible current flowing on the boom, the Yagi itself (elements and boom) are quite symmetric.

The masting fairly wrecks system symmetry, and since the mast and boom are not subject to asymmetric influences from the Yagi element current, current is in turn induced on them. The problem is the mounting arrangement.

Aha, what if we used a non-conductive mast?

It may be possible in this case to install one or more ferrite toroids or sleeves on the vertical coax to discourage current, it would be impractical to try this on larger conductive masts.