I have a Toro ride-on mower which ran out of fuel when it was just a couple of years old, perhaps 50 hours on it. Okay, so that is going to happen with failure to check fuel level before starting… but the problem was that when the tank was filled, it would not start, the petrol pump would not self prime even though the suction head was very small with a full fuel tank.

Mindful that long cranking is very hard on batteries, I used the starter sparingly in short bursts with cooling off time. Nevertheless, the battery went open circuit.

So I replaced the battery and primed the pump by hand… and all has gone well for some years… until last week, I ran it out of fuel, duh! 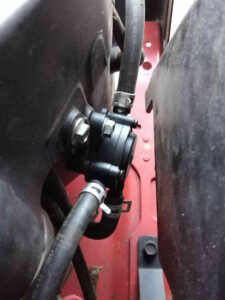 Same problem, when the tank was filled, the pump would not self prime.

The machine has a problem that needs to be fixed.

The inline filter was checked, and fuel flowed though it quite well by gravity. This time, I primed it by hand early in the process and got on with mowing. This was probably not a vapor lock problem, everything was quite cool by the time I fueled the machine.

The follow up action was to repair the faulty pump. The price of a genuine Toro part (Walbro) is outrageous, so I elected to buy an after market pump with a Briggs and Stratton part number (808656). I needed to take the cover off, cut a couple of locating nipples and rotate the cover 90° to match the existing hose routing… for a sixth of the price, that was ok. Beware, some pics show the pumps built without screws, but it should be possible to use the Briggs hose routing. 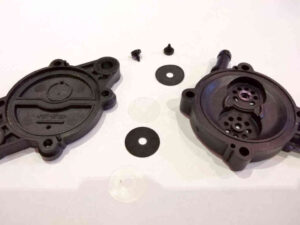 Above, the two pump valves removed for inspection. They do not look particularly bad, the diaphragms seem supple enough, no obvious damage (though one of the seats looks a little eroded), they do run the mower… just the pump will not self prime, even with a very small suction head.

The pump was replaced (see first pic), and the output connector was piped into a can and the mower started (running on the existing float bowl). Of course it started instantly, but the important thing was that the pump self primed just fine.

More Ethanol problems? I don’t know. This mower was run on E10 for the first few years, it could have contributed to the minor erosion of one valve seat.

The costs of mandated E10 continues to grow, there is not a single small engine here that has not been damaged by Ethanol bearing fuel.