On a recent routing maintenance inspection, I dropped the carburettor bowl to look for signs of Ethanol damage (mainly corrosion). During that inspection I noted that the bowl gasket was hardened even though the engine is only 13 years old, and that a stain on the mulcher body hinted a fuel leak even though the bowl exterior seemed dry on test..

A piece of silicone tube was connected to the carburettor in place of the normal fuel hose, a little petrol added to the hose with a pipette, and then a sphygmamometer used to pressurise the hose. 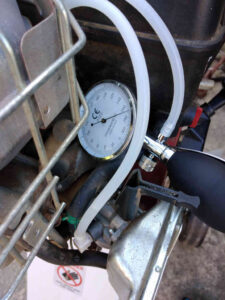 Above, the test in progress. The fuel level in the hose can be seen about 30mm from the end. The pressure is leaking down quite slowly, the leak is not fast enough to upset engine operation (by flooding or even an over rich mixture) but it might well result in dilution of the crankcase oil when the engine is left standing. It needs repair. 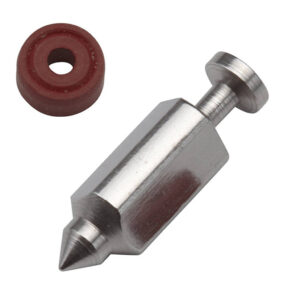 The needle and seat are an inexpensive kit, a couple of dollars on Aliexpress for the equivalent of the Briggs and Stratton 398188. As can be seen, it is a steel needle and silicone seat. The existing one will be examined when the replacement arrives, it is likely that it has hardened and quite probably due to E10 fuel which was used for some years when non-Ethanol fuel was banned (thanks to Greenies).

The costs of mandated E10 continues to grow, there is not a single small engine here that has not been damaged by Ethanol bearing fuel.