A reader of Do I ‘need’ a masthead preamp to work satellites on 2m? – space noise scenario has written to say he does not like my comments on the hammy adaptation of G/T.

Above is an archived extract of a spreadsheet that was very popular in the ham community, both with antenna designers and sellers and end users (buyers / constructors). It shows a column entitled G/T which is actually the hammy calculation. The meaning possibly derives from (Bertelsmeier 1987), he used G/Ta.

Ta is commonly interpreted by hams to be Temperature – antenna. It is true that antennas have an intrinsic equivalent noise temperature, it relates to their loss and physical temperature and is typically a very small number. But as Bertelsmeier uses it, it is Temperature – ambient (or external), and that is how it is used in this article.

Let’s calculate the G/Ta statistic for the three scenarios in Do I ‘need’ a masthead preamp to work satellites on 2m? – space noise scenario. 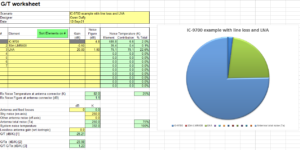 Above is a calculation of the masthead amplifier scenario, G/T=-25.21dB/K.

With LNA at receiver 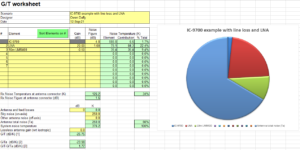 Importantly, you cannot derive G/T from G/Ta without knowing either G or Ta (and some other important stuff), the G/Ta figure by itself cannot be ‘unwound’… so if you select an antenna ranked on a G/Ta value (even if mislabeled), the ranking of ‘real’ G/T may be different depending on many factors specific to your own scenario, ie the one with the better G/Ta might have the poorer G/T.