When we moved to this place in 2009, I could see the utility of a ‘aborist chainsaw’, or ‘top handle chainsaw’.

I bought a cheap Chinese 25cc jobbie, in fact it was so good I bought a second for spares. 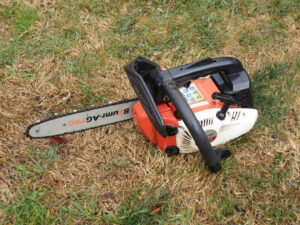 This saw had seen off 6 chains by 2021 and forced by some reliability issues, I decided to replace it with the spare and repair it at my leisure (parts from China are real slow). It has had a good life, usually warmed up before being gunned up to WOT to avoid cold seizure.

As a test, the saw ran of 25:1 using Valvoline two stroke oil. Yes it smoked plenty. The saw had E10 fuel in it for some years until Ethanol free ULP became available again.

In the first year of its life, some of the fuel hoses rotted and the primer failed (bad check valve). 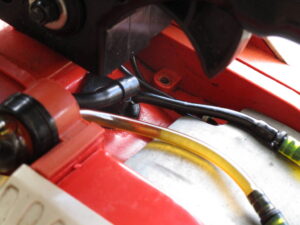 The tygon fuel hose is replacement for original rotten hose. 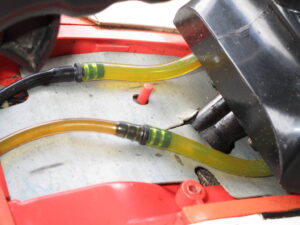 The main problem was that it would not idle, and adjusting mixture for better running resulted in the screws way too far out… something was wrong.

Before investing time in this, lets check the condition of the piston. 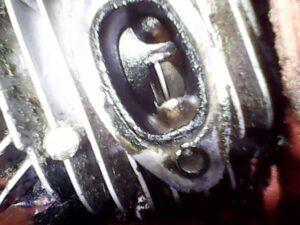 Above is a view into the exhaust port. Not much carbon deposit, a very little ‘varnish’ deposit on the piston, the ring looks good and no sign of carbon jamming up its free movement. 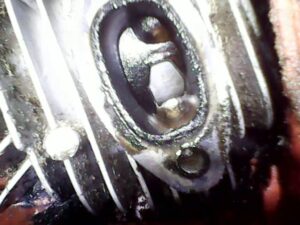 Above, the lower part of the piston is good.

So, that all looks promising.

The carburettor was pressure tested, and it was fine. It was dismantled and was clean as a whistle, but both the pump membrane and metering diaphragm were on the brittle side, needle looked good and it had passed the pressure test fine. Remove the H and L screws and blow them out gently. The main nozzle check valve appeared to be working fine (tested by mouth with a short piece of fuel hose to blow and suck). Fuel flowed freely though all the orifices, no need to pull welch plugs out.

Ok, so new diaphragms and gaskets, needle ($3 for the repair kit), small tweak to the needle lever height. Wet the carby and rerun the pressure test. All good, preset the H and L scres and back into the saw. New fuel filter, air filter, prime and it started first pull, allowed to warm up and idle mixture and speed and high mixture adjusted so that it was just cracking into four stroke sometimes.

Now here’s a problem, it needs the idle real slow… the clutch springs are weak? 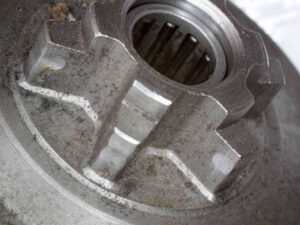 Above, the spur sprocket is hardly worn considering it has worn out six chains (which were sharpened too many times). I cannot complain about that, but I need to replace the clutch springs at least and at $12 for clutch, sprocket drum and needle bearing, the whole lot was replaced. The damn thing had thread lock on it, why do they do that… they are hard enough to get off without thread lock.

Now idle can be raised to about 2600rpm which helps fast throttle response.

The machine starts really easily, is smooth, reaches almost the same rpm as the ‘new’ machine, responds quickly… time to put a few hours on it and once proven reliable, to sell it and rely upon the #2 machine.

This has been a good saw notwithstanding early fuel hose issues, it is convenient to use for pruning bushes and small trees. I hasten to add that these saws are recognised as more dangerous than the conventional rear handle configuration, partly because of users one-handing the saw.

Some documentary shots on the #2 machine. It will be run on 50:1 Amsoil Sabre two stroke oil. The machine would have perhaps five hours on it, and again 25:1 using Valvoline two stroke oil up to this point. 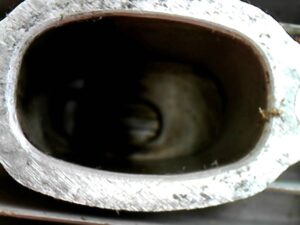 Above, the exhaust port looks pretty clean… well it is essentially new. 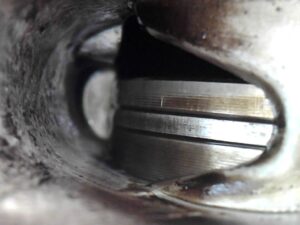 Above, the top of the piston looks good, very little sign of ‘varnish’, but it has been running on 25:1. Though these saws look very similar outside and share common parts, the pics reveal that jugs and slugs are different. 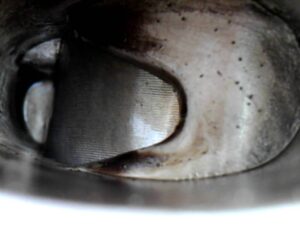 The lower skirt of the piston looks fine.

Let’s see what they look like after some hours of use.

Since this saw also had E10 fuel in it for some years, the carby was kitted (as above) even though it was starting and running fine. On inspection, the diaphragms were degraded, so the replacement was warranted.