A long time ago when I first ‘got on the air’, a mentor suggested I build the famous figure 8 dipole (or zip line dipole in North America). The advice was that it had characteristic impedance very close to 70Ω, ideally suited to a half wave dipole and could be made with a clever not obviating the need for a centre insulator. A ham rite of passage? 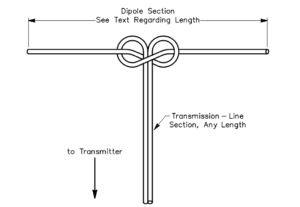 Above, the dipole from the ARRL Antenna Book.

Now zip line in the US where 110V AC distribution is used is somewhat thicker than the figure 8 line used in Australia (230V AC distribution). Australian figure 8 twin used to be 23/0.0076″ and the modern metric version is 24/0.2mm.

Rummaging around in the shed, I found an ‘archived’ (ie lost) offcut of 10m length of line manufactured about 50 years ago, NOS. It was quite stiff, it would seem the plasticisers in the PVC insulation had degraded / evaporated to some extent, but the copper was shiny bright. A candidate for measurement, surely!

Measurements were made using a nanoVNA of impedance looking into the 10m section with short circuit and open circuit terminations, and from that the line characteristics calculated. 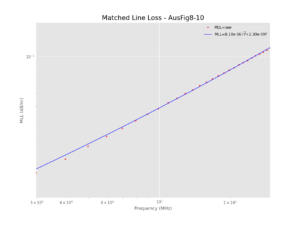 Above is a plot of: 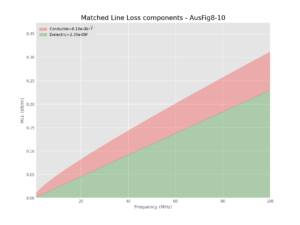 Above is a plot of the components of MLL. Dielectric loss is a large part of the MLL at HF, considerably higher than good RF cables.

The calculated loss coefficients were used to populate an entry in TLLC (development version initially).

An example scenario of a half wave dipole on 14MHz with 20m of feed line was evaluated. 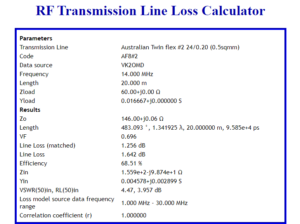 Above, the calculated results. Two issues stand out:

Increasing the feed line length to 1.5λ (22.4m) would improve VSWR(50) in this application at a small expense of some additional line loss.

Various authors have warned of the poor performance of zip line, speaker twin etc over the years, but still it is common advice to newcomers. The ARRL Antenna Book gives zip line MLL=12.4dB/100m @ 14MHz, the AU line discussed in this article was 12.6dB/100m… quite similar despite smaller conductors and higher Zo.