I have a 6kVA genset that uses a Honda 8kW GX390 OHV engine that was due for maintenance.

I dragged it out, fueled it (it had been stored dry) and tried to start it for a test run… but no such luck.

Turns out that the most immediate problem was that a sintered bronze fuel filter in the tank nipple was blocked. It cleared with a blast of air in reverse, so it is likely to be corrosion caused by water separation from E10 fuel over time as the tank finally dried out. Some very small evidence of rust on the bottom of the fuel tank supports that diagnosis.

All the listings on eBay were for a plastic gauze filter, perhaps over 10 years the bronze one has been phased out… incompatible with Ethanol fuels?

Ok, so it ran when the filter was replaced.

I dropped the Keihin carburettor fuel bowl to check for debris and corrosion, it was excellent, so I put it back.

Though it did not have many hours on it, the oil needed changing due to its age. 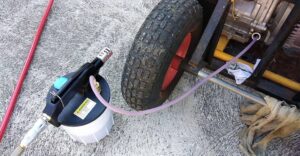 The oil was evacuated using a pneumatic brake bleeder. It is quick, clean and the graduated container shows how much to initially charge the sump (1l on this engine, quite a large sump).

I know traditional advice is to store these dry, but I have fixed too many problems caused when Ethanol bearing fuel dries up and water separates. Fortunately ordinary ULP (ie zero Ethanol) is again available, I added Nulon FSAK to the fuel to extend its life and will store the machine wet.

I have now done a ‘bowl drop’ on four of my small 4 stroke engines over the last month, all have had E10 fuel in them at some time (thanks to the greenies), but none of them showed the gel like mass that features strongly in American videos of small engine carburettor tear downs.

So, in summary, E10 fuel would be the likely cause of the in-tank fuel filter blockage and slight corrosion of the bottom of the tank, but there was no sign of corrosion in the carburettor and the die cast fuel cock seems to still work smoothly.