On testing coax cable loss with an analyser / VNA – part 3 drilled down on a better method of approximating the matched line loss (MLL) of a section of transmission line based on measurements of ReturnLoss with the section terminated in both an open circuit and short circuit. This article goes a little further using the saved measurement files to answer a reader’s questions.

TLLC and TLDetails are two line loss calculators, and they use quite different predictive models. 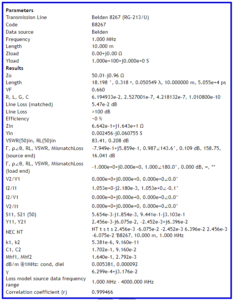 Above is the calculation results from TLLC. for the 10m section of Belden 8267 (RG213) with short circuit termination. Note the calculated loss model coefficients k1 and k2 which will be used in a later graph. 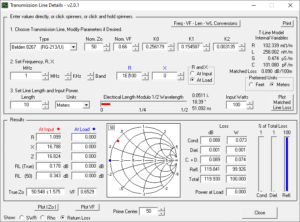 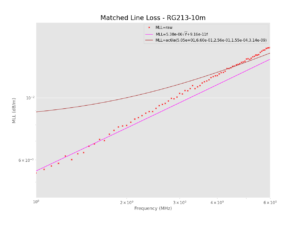 Above is a plot of MLL (dB/m) calculated from the measurements used in the previous article and saved as s1p files (raw), and predicted loss using the models and coefficients from TLLC and TLDetails (labelled ac6la).

We should not expect the predicted values to reconcile exactly with measured, the DUT is an old section of cable in good order and subject to manufacturing variation.

That said, I find it difficult to reconcile TLDetails MLL=0.0089dB/m @ 1MHz with the measured value of 0.0055dB/m. The shape of the ac6la curve at low frequencies questions whether it is a good model for the measured coax section.

Deeper analysis of the measurements 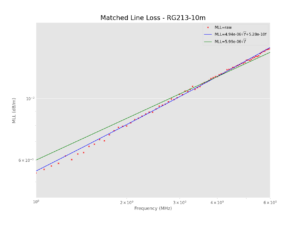 Above is a plot of MLL (dB/m) calculated from the measurements used in the previous article and saved as s1p files (raw), and fits to two models:

It is clear that the apparent slope of the raw data points is greater than the green curve, so it appears that loss increases at a greater rate than simply square root of f (conductor loss in presence of well developed skin effect).

The blue curve is a better fit and it sizes the extent of the contribution of loss proportional to f (dielectric loss). The coefficient k2 is 3.14e-9 as against the k2=5.28e-10 used in TLLC (see previous graph) and derived from Belden’s published characteristics. The suggestion is that this cable has higher dielectric loss than expected, though it really needs a higher frequency scan to provide convincing evidence of this.

Is it plausible? The cable section is Belden 8267 purchased new in 1970, it is 50 years old. It has never been exposed to the weather, never wet, never abused. It has crimped Kings N plugs that are in good condition. An issue with coax construction of this type is leaching of plasticisers from the PVC jacket to the PE dielectric degrading its performance. Though this is specified as a non-contaminating jacket, it is quite old cable and it is possible that is an explanation of the apparently higher dielectric loss coefficient.