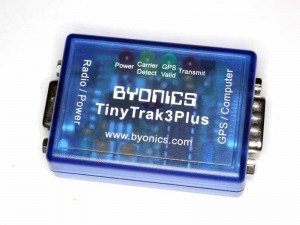 The configuration software worked reliably, but some default settings were not appropriate which led to unnecessary work. 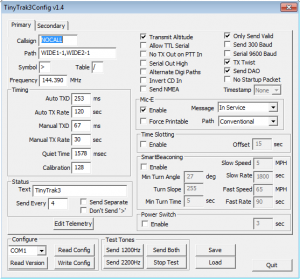 Audio drive was adjusted to 3kHz devn @ 2200Hz, and it was noted that devn @ 1200Hz was just 800Hz… half of expectation. I replaced the output capacitor with a 1µF monolithic in case the transceiver input Z was contributing to low-end roll-off, but it made no difference. The problem was that the default “TX Twist” setting was adding pre-emphasis when it was not needed, the transceiver supplies pre-emphasis.

The carrier detect (CD) was impossible to adjust so that it worked, and after a lot of fiddling, that too was caused by an inappropriate default, “Invert CD” needed to be ticked. The CD detects not just data but also noise, so the receiver cannot be run ‘open squelch’.

Documentation was good, but with experience of earlier versions I was inclined to perform minimum configuration change and expected it to run out of the box.

There is no comparison with the original TinyTrak, or clones such as the FoxTrak with either DK7IN or aprstracker 0.11 firmware, the TInyTrack works very well whereas the others mentioned work poorly.

Upgrade chips are available from Byonics, but the chip posted to Australia is expensive, a premium of US$3 is added for non-US buyers and then US $17 post, making it A$44 landed as against A$52 for the whole kit landed.

Though the kit at A$52 landed is almost twice the price of a Foxtrack kit (which also included a null modem kit), it is much better value because of better performance and less defects.