This article explores the physics of fuel metering in a typical small diaphragm carburettor (carburetor to some) as used on small 2-stroke chainsaws, leaf blowers, brushcutters etc.

The discussion following is in terms of absolute pressure, and it is assumed that atmospheric pressure is 100kPa. ALL pressures are absolute unless stated otherwise, to find gauge pressure, subtract 100kPa. 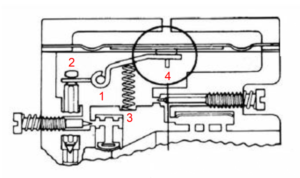 Above from Zama is a cross section view of the metering chamber of a typical butterfly carburettor. The metering lever pivots on an axle (1), the distance from the axle to the needle (2) is 3.5mm, to the spring (3) is 3.5mm, and to the contact to the metering diaphragm (4) is 8mm. The needle seat is 0.55mm diameter.

So, time for application of a bit of high school physics.

If crankcase impulse reach 150kPa (appears a commonly quoted figure), so the fuel pump supplies fuel at about 150kPa.

The metering lever has the following forces acting upon it:

Each of these give rise to components on moment in the metering lever.

Let’s work through them, results are rounded for presentation but greater precision is carried forward in calculations.

So, this system maintains the fuel chamber at a pressure of almost atmospheric pressure, admitting fuel through the needle as needed to maintain that pressure. The fuel chamber below the diaphragm supplies fuel at regulated pressure to the jets / orifices / nozzles in the carburettor body where fuel is drawn into the lower pressure area on the intake side of the venturi (and choke).

We might expect that at WOT (wide open throttle) that the pressure on the intake side of the venturi during induction is less than 70kPa (or -30kPa gauge pressure), so there is a pressure difference of around 30kPa between the fuel chamber and the main nozzle tip. The effects of the metering lever spring and the force exerted by the fuel pump on the needle tip at around 26Pa are near insignificant, they have very little influence… as one would want.

Note that being 2-stroke, there may be instants in a cycle when pressure at the main nozzle tip exceeds atmospheric, hence the nozzle check valve (which can be seen in the diagram above).

Popoff pressure is the fuel pressure that unseats the needle.

It needs to be greater than the fuel pump pressure, otherwise the carburettor will flood or at least run excessively rich. For that reason, it is wise to pressurise the fuel input to say 170kPa (70kPa gauge remember) to be sure that the system does not leak down. A wet carburettor should hold that pressure for 1min with very little leak down.

Some practitioners use a Sphygmamometer scaled to 300mmHg (140kPa absolute), not sufficient for popoff testing, but will reveal a leaking needle, gasket or membrane.

Popoff testing means raising the pressure until the needle unseats due to the supply pressure. The pressure may be from 200 to 500kPa, though around 200-350kPa seems ‘normal’. There are two questions that should arise:

In respect of 1, Zama advise against popoff testing, suggesting that it may damage the carburettor (presumably the fuel pump membrane).

In any event, fuel pressure and spring pressure normally make only a very small contribution to the regulated fuel pressure, so small differences in either should not make much difference to system operation. It is mostly about ensuring that the needle does close off properly as needed so that fuel pressure is effectively regulated.

That being the case, online expert’s advice to ‘tune’ popoff pressure or spring pressure seems quite misguided for these small diaphragm carburettors. 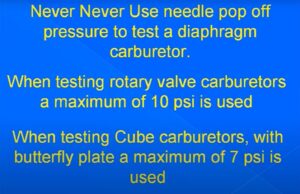 His training video on carburettor pressure testing recommends not more than 7psig and 10psig, the metric equivalent gauge pressures are 48kPa (0.48b) and 69kPa (0.69b) respectively.

A pressure test of the wet carburettor fuel input at a little less than 200kPa  (~170kPa or 70kPa gauge) is meaningful in identifying leaking gaskets, needle, membranes. 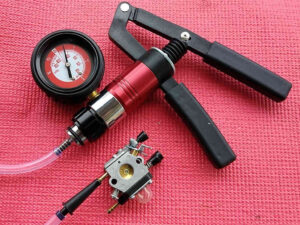 Above is a cheap Chinese vacuum / pressure pump, pumped up to 0.5b gauge pressure (50kPa gauge, 150kPa absolute).

Repeating this test after repair and reassembly is good quality assurance, more than good, and can save having to uninstall and reinstall a leaking carburettor, or an incipient problem that will get worse in time.

I do observe that the metering lever operating force seems reasonable, if I have suspicions it is easy to put the carburettor on a gram scale and measure the force on the lever to unseat the needle… it is usually less than 100mN (10gf) in small carburettors.

I do not perform popoff testing.