The diagram above from the video shows the topology of the series stub match. 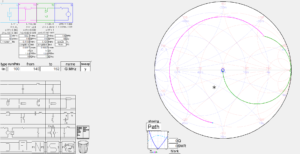 Above is a naive Simsmith model of the scenario with line lengths adjusted for a ‘perfect’ match. The inset VSWR curve looks great!

Why did I say naive?

Well, when we look at the series stub more completely, along with the differential mode behaviour that is captured in the Simsmith model above, we have the outside surface of the outer conductor of the stub connected to the main line inner conductor on the source side of the stub and it is capable of carrying current.

This stub outer surface current may give rise to radiation and impresses a load impedance across the main line coax in shunt with the perfectly transformed 10-j40Ω load. The value of this unintended impedance depends on the stub physics.

In this case, the stub is just under a quarter of a wavelength, and modelled as a monopole over a ground plane would present a driving impedance of around 15-j80Ω. 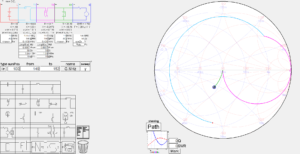 Above is the Simsmith model with the addition of the estimated impedance of the stub outer as a radiator in shunt with the main line. The matching result is degraded by the stub exterior’s ‘antenna effect’ and that unintended radiation / pickup may be undesirable. 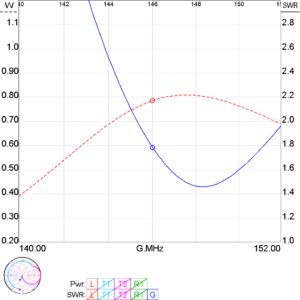 The VSWR curve is not so good now when the ‘antenna effect’ of the stub is brought to book. The match could be tweaked some, but it does not remove the radiation / pickup behavior of the stub.