Permeance \(\mathcal{P}=\frac1{\mathcal{R}}\) we can rewrite the above as \(\phi=\mathcal{F} \mathcal{P}\). Permeances of parallel magnetic paths add, so if we stack two cores sharing the same winding, the total permeance is the sum of that of each core \(\mathcal{P}_t=\mathcal{P}_1+\mathcal{P}_2+…\).

Inductance of a toroidal ferrite cored inductor then is given by \(L=\mu N^2 \int \frac{A}{2 \pi r}dr\) (noting that µ is a complex quantity and frequency dependent). More properly, the ‘inductor’ is a resonator and as you approach its self resonant frequency, inductance alone is not an adequate model… nevertheless consideration of the simpler inductance calculation gives valuable insight.

If we stack two cores of the same physical size side by side, then µ is not uniform across the cross section, so we must capture µ in the integral \(L=N^2 \int \frac{\mu A}{2 \pi r}dr\). 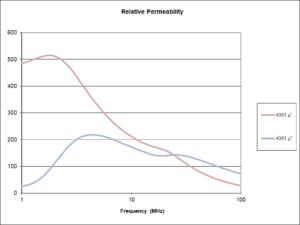 Readers will see that stacking one #61 mix core with one #43 mix core of the same sizes is roughly equivalent to a core of the combined cross section area with µ characteristic an average of the two mixes.

This is not equivalent to series connection of two separate inductors with each core type and same number of turns, the effects around self resonances will differ. Since to some extent, common mode chokes rely upon self resonance (albeit low Q) for their operation, this difference in response is quite relevant. Dissipation capacity is likely to be different.

In the light of that understanding, put your thinking cap on when you see magic properties ascribed to this configuration.

Note, this analysis does not address the behavior near or above the self resonant frequency.