The original LCD display was white on blue, but was very difficult to read at some viewing angles, so it had to go. Unfortunately I could not find more displays with that hole pattern, it seems to have been discarded for a newer hole pattern as almost everything I looked at had the same newer patter.

So, the box front needed rework, and there would be visible spare holes… so a dress escutcheon was designed in Freecad and cut on a CNC router. 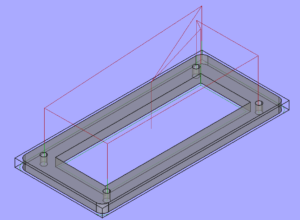 The escutcheon was designed to be cut from some 3mm black acrylic sheet that was on hand, and it would cover the reworked panel.

One of the nuisances of the ‘modern standard’ pattern LCD1602 is that the edge connector is often very close to a mounting screw hole, too close to comfortably accommodate a piggyback I2C adapter. 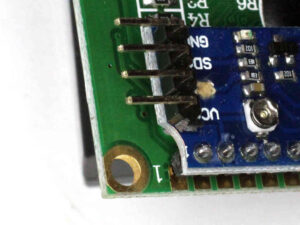 Above, relieving the corner with a 8mm diamond cylinder in a Dremel tool allows nut driver access to the mounting screw hole. These are a terrible configuration, as you see the piggyback board is made to require 20mm of space at the side of the module for the i2c plug. In this case, they were bent almost 180° to allow zero clearance at the side. 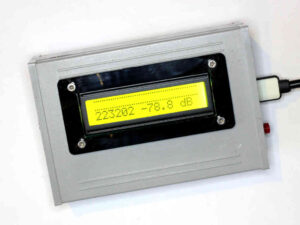 Above is the reworked rfpm2 with a newer black on yellow LCD which works very well over a wider viewing angle, indoors and outdoors. Some button head screws are on a slow boat from China.