This article is on in a series of a desk review, a pre-purchase study if you like, of the MiniPa100 kit widely sold on eBay and elsewhere online. 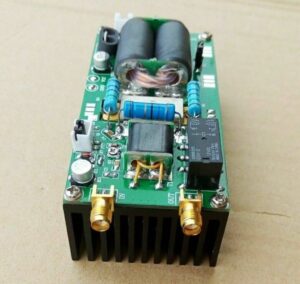 The above pic from an eBay advertisement of the 2020 version of the PA would suggest very strongly that there are three turns on the secondary of the output transformer, and a half turn on each drain. Interestingly the 70W versions also appear to use three turns, alarm bells ring!

Here is a little table that shows the maximum power obtainable with a transformer of this type for various supply voltages and secondary turns.

You would usually design for rated power to be a little less than shown in the power cell for a particular combination. For example, if you wanted 100W out on 16V supply, you might choose a four turn secondary (which is capable of somewhat higher power). As can be seen, three turns is probably ok for up to 75W on 16V. The danger in undersizing (low Nsec) is risk of saturation and resulting non-linearity / intermodulation distortion.

Let’s do some thinking. 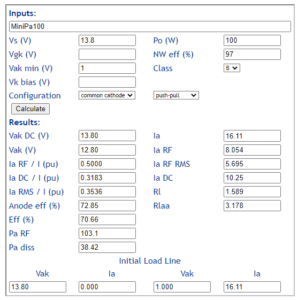 Above, an initial load line estimate suggests the required load impedance drain to drain is 3.2Ω, which can be achieved with a Z=16:1, n=4:1 ideal transformer from 50Ω giving nominally 3.125Ω.

Let’s look at a Simsmith model that brings the transformer core to book, and models some other practical aspects of a transformer. 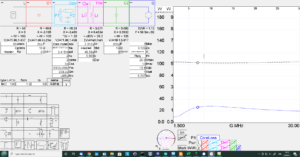 Powered from a 13.8V supply and into a 50Ω load, we just make 100W… using a four turn secondary on T2. Note that this is analysis of an ideal Class B amplifier, though with the stated limits on voltage swing (including an allowance for transistor saturation), and it should not be interpreted to mean that higher power could not be obtained by driving it into non-linearity.

Note that this module does not include the necessary output filter which will lose 5-10% of the power from this module.

There is more than a little deception in advertising of these things.

It seems sellers do not offer a schematic, manual, or any assurance of the transistor type fitted… prior to or after sale.

One listing of a kit with used transistor and no heatsink states 5.max output power: 100W(13.8V/80W;16V/100W). Apparently aware of the risk of underachieving. Models suggest that the amplifier and appropriate LPF should deliver towards 120W on 16V supply.

But, they are apparently not short of buyers. A case of caveat emptor,  the usual issues of trust and China exist in spades.