M0DGQ described a broadband HF PA in the Wythal Radio Club’s newsletter 2017-01, and rated it at 150W output. Note that this module does not include the necessary output filter which will probably lose 5-10% of the power from this module. 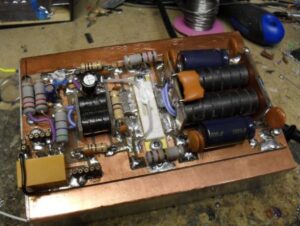 Above is the prototype PA. The text states very clearly that the output transformer uses a secondary of two turns of PTFE insulated wire, and the pic above does not provide evidence to the contrary.

Hmmm, experience suggests that may be too few turns.

Here is a little table that shows the maximum power obtainable with a transformer of this type for various supply voltages and secondary turns.

You would usually design for rated power to be a little less than shown in the power cell for a particular combination. For example, if you wanted 150W out on 26V supply, you might choose a three turn secondary (which is capable of somewhat higher power). The danger in undersizing (low Nsec) is risk of saturation and resulting non-linearity / intermodulation distortion. 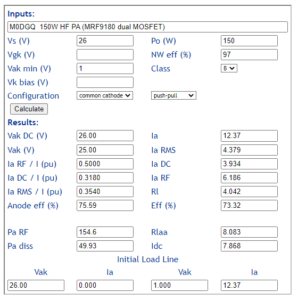 Above is a simple prediction of the initial load line of an amplifier of this type with 26V supply and 150W output. Though the calculator is written in terms of valves, the technique is valid in this case, and Rlaa, the anode to anode load resistance is equivalent to the drain to drain load resistance, and we might expect it in the region of 8Ω. 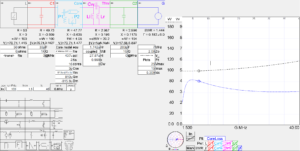 Above is a Simsmith model for the two turn secondary, and it includes a model for the ferrite core, and some allowance for flux leakage in the transformer… so a not quite ideal transformer but probably a good estimate of a good transformer.

Power output falls way short of 150W. Note that this is analysis of an ideal Class B amplifier, though with the stated limits on voltage swing (including an allowance for transistor saturation), and it should not be interpreted to mean that higher power could not be obtained by driving it into non-linearity.

The problem is that we have delivered a higher load impedance to the drain that needed. The theoretical impedance transformation needed is 50/8.333=6 which implies a turns ratio of 2.45:1…  so that would require a 2.45t secondary which is not practical (for balance reasons). We can use 2t which results in lower power, or 3t which will result in higher power.

Let’s examine a three turn option for a drain to drain load around 5.5Ω. 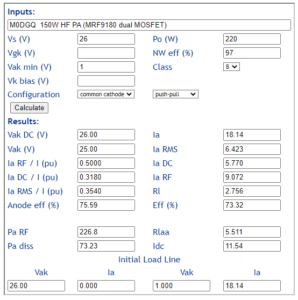 Above is the initial load line prediction. 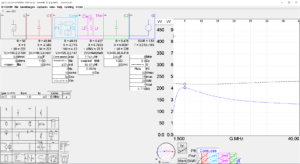 Above is the Simsmith model adjusted for the three turn secondary.

Reducing supply voltage brings total power down if dissipation is a problem.