At Ultrafire XML-T6 LED torch – a fix for the dysfunctional mode memory ‘feature’ I gave a fix for that revision of the electronics, and updated it with description of a later fixed production model.

Years later, I bought two more of these due to switch failures on the originals… and guess what, the flash on power on returns.

They have a new revision / version of the LED driver PCB, and it has provision for a resistor in parallel with the capacitor, but the resistor pads are not populated. 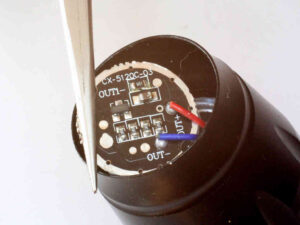 Above, the LED driver board with a 100k resistor added, it is the far component. This was an 0805 part that was on hand, but ideally should be a 0603. 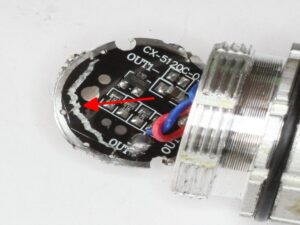 Above, the second torch could not be saved, the driver PCB was cracked, a result of heavy handed forcing the PCB into its recess when not properly aligned.

This model is a little different construction to the first ones I wrote about. To dismantle it:

To finish, add the resistor, clean everything, wipe a little silicon grease inside the front barrel, slide the LED housing into it and screw the main barrel onto it. Tighten the LED housing, install the battery, lubricate the rear thread and o-ring with silicon grease, and test it all works. Then clean the LED, reflector and  lens and reinstall the lens and retaining ring. All done.