N6THN’s novel balun presented measurement of the Insertion VSWR of the subject balun, this article presents an explanation of why it is so poor.

The balun as described 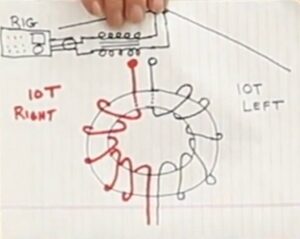 Above is the ‘schematic’ of the balun. Note the entire path from rig to dipole. 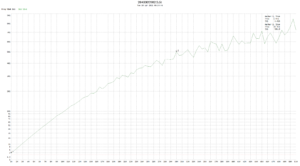 Above is a plot of VSWR from 1 to 51MHz. It starts off at VSWR=2.8 @ 1MHz, not good, and increases with increasing frequency to VSWR=500 @ 30MHz. (The marker label is misleading, it is a significant software defect, the values are not s11 as stated on the chart but VSWR.)

You might ask how is this different to the case where the two wires were twisted together and 10 turns wound onto the core. They both seem like coupled inductors… and they are, but there is a significant difference is in the extent of coupling, the extent of flux leakage.

Measurement of the short circuit section shows first resonance (antiresonance actually) at 44MHz which allows calculation of VF as 35%.

The combination of extreme Zo and very low VF causes much greater impedance transformation of a 50Ω load than normally desirable, as can be seen from the VSWR plot above. 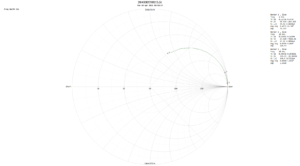 Above is the measured data presented as a Smith chart. For a low Insertion VSWR balun, we would expect the trace to be entirely very close to the prime centre of the chart. This doesn’t even start off there, and just gets worse with increasing frequency. 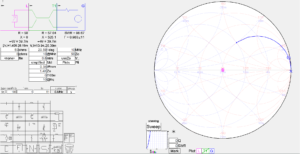 Though a very simple model, the series transmission line section of Zo=1400Ω ohms and VF=0.35 captures most of the measured behavior.

There is a simple explanation for the very poor Insertion VSWR of the N6THN balun, it uses a loaded transmission line section with very high Zo and low VF.

If you want low Insertion VSWR in a Guanella 1:1 balun, ensure that Zo of the transmission line section is close to your load impedance.