These are measurements of a single sample, so average values might be a little different. Additionally, the R25 / B25/100 model is only an approximation.

This article shows a curve fit of the measurements of the two most common of those sensors to the Steinhart-Hart model of a NTC thermistor. Also shown on the graphs is a plot of calculated temperature using the simpler B equation based on measurements around 20° and 100°.

The Steinhart-Hart model is \(T=\frac{1}{a+b(ln(R))+c(ln(R))^3}\). It is a little more complicated to calculate than the simpler B equation, so less used in simple digital systems. 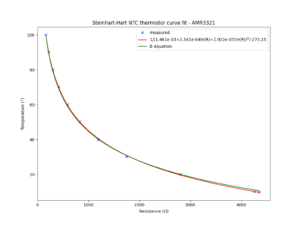 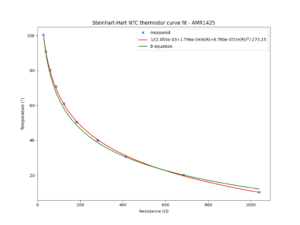 Above is the AMR1425. The fit is a quite good one to the measured data, and as it happens, the B equation is a good estimator, but not as good as in the AMR3321.

This is inconsequential with a typical analog gauge which can be scaled to suit the sensor, but it becomes more relevant to a digital application that tries to use a simple equation to relate resistance to temperature.