The subject vehicle is a Land Rover Defender of mixed heritage. The owner describes the engine coolant temperature (ECT) gauge as useless.

The ECT display system is a dashboard gauge and negative temperature coefficient (NTC) thermistor mounted near the engine thermostat. It measures the engine coolant temperature (hence its name) at the hottest point in the coolant circuit… so it gives the best warning that coolant might be approaching boiling point… and which point cooling capacity catastrophically falls and there is a significant risk of permanent engine damage.

It would seem that Land Rover used many different dashboard gauges, but the underlying electrical characteristics were of just two different types. Likewise there appears to be several different sensors.

These are measurements of a single sample, so average values might be a little different. Additionally, the R25 / B25/100 model is only an approximation.

It can be seen that the first three are quite similar, but the AMR1425 is very different.

The question here is whether in the subject particular vehicle, the dashboard gauge and ECT sensor are compatible.

1. ‘Cold’ resistance of the ECT with wire removed is 2730 ohms at around 20C. This hints the ECT sensor is unlikely to be a AMR1425 but one of the others mentioned (which are fairly similar).

The critical performance of the system is that it properly indicates ECT around 100°, and it should be in or close to the red area of the gauge.

2. Connecting the gauge to parallel resistors for total R=155Ω which is the expected 100° resistance of the types with R25 around 2500Ω yields the following. 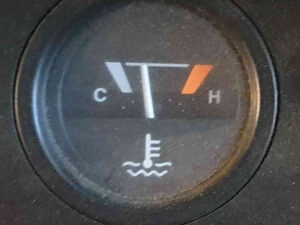 So, the gauge does not seem compatible with R100 around 155Ω, it does not properly indicate ECT close to coolant boiling point, so a critical failure. 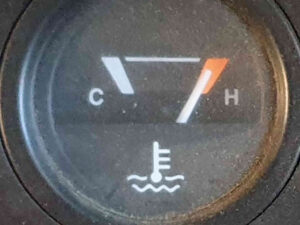 4. Calculating the expected temperature of the AMR1425 at 27.5 ohms from the constants above, we get: 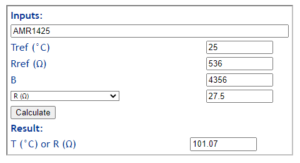 … which is bang in the the red zone.

This gauge appears to be compatible with the AMR1425 ECT sensor, not the one fitted to the engine.

This seems to be the result of an unprofessional / half baked conversion of a petrol vehicle to a diesel engine, part of the subject vehicles pedigree.