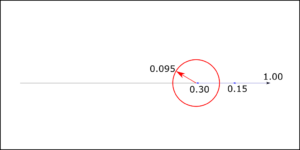 Above is a diagram of the various vector components of an AM signal with random noise, shown at the ‘instant’ of a modulation ‘valley’. The black vector represents the carrier (1V), the two blue vectors are counter rotating vectors of each of the sideband components, in this case with modulation depth 30%, and the red vector is 0.095V of random noise rotating on the end of the carrier + sideband components.

AM is commonly demodulated in an envelope detector, and their departure from ideal linearity is significant. 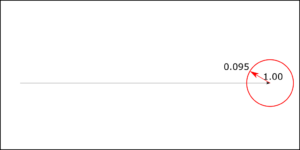 Above is a diagram of the same ‘signal’ and the same noise as presented to an SSB detector.

The black vector represents the carrier (1V) and the red vector is 0.095V of random noise rotating on the end of the signal component.

SSB detectors are not perfect either, but circuits that are principally mixers are typically closer to ideal than AM envelope detectors on AM. Envelope detectors used with a BFO for SSB depend on incidental mixing and are quite unpredictable.

On the basis of the above, we would expect the sensitivity figure for SSB at 10dB (S+N)/N to be 10.5dB lower (or about one third) that for the AM detector.

Yet specifications for real receivers tend to give differences more in the range of 15-20dB. Why?

If we know the sensitivity specification and Equivalent Noise Bandwidth we can calculate the receiver Noise Figure.

The difference in stated sensitivity for conventional communications receivers between AM and SSB modes is due to two main contributions: