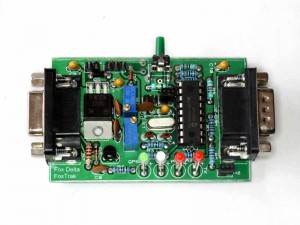 APRSTRACKER v0.11 was trialled as it offered promise of a better SmartBeaconing implementation and support for altitude, course and speed reporting.

The published firmware is 8 years old, and the distribution was frustrating. It did not run on two computers that I tried, and when reviewing the source code for the configuration utility, it has the serial port name hard-coded in. I did manage to compile the source on a Linux box and run the programmer. This is software by beginners and did not bode well!

Nevertheless I persevered and got the thing configured and gave it a drive test. The SmartBeaconing did seem better than the DK7IN firmware, but the reported altitude was in error.

Deep in the code is the statement used in conversion of the GPS altitude input:

The variable t is an 8 bit variable, and overflows if the digit d is greater than 7 so this code will produce faulty conversion for any altitude with digits 8 or 9 in them.

The defect has not been fixed in 8 years, so it stands as testament to a stagnated project and was enough evidence to conclude the trial.

This is one to skip, the features are rich but they don’t work properly, the configuration tool is very difficult to use, and it appears not to be maintained.