This article documents measurement and analysis of a VK3AMP Sontheimer directional coupler in an implementation of a 400W wattmeter design by N2PK (Kiciack nd). 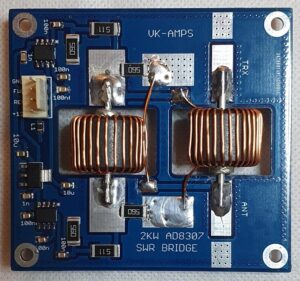 I purchased one of the couplers for use with a DIY digital display, and although I have had it longer, it isn’t yet realised!

A common failing of almost all hammy Sammy designs is appalling InsertionVSWR at the lower end of the specified frequency range. This coupler is specified for 1.8-54MHz, and differently to most, has meaningful published characteristics.

In this implementation, 60mm lengths of solder soaked braid coax similar to Succoform 141 were used between the PCB and box N connectors. The expected matched line loss of both of these is about 0.01dB @ 50MHz.

The measurements here were made by VK4MQ using an Agilent E5061A ENA, data analysis by myself. 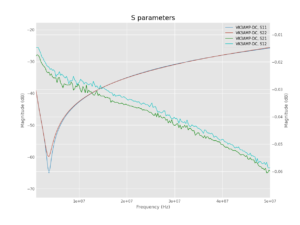 Above are the raw s parameter measurements plotted. It is a full 2 port measurement, and it can be observed that the device is not perfectly symmetric, quite adequate, and quite good compared to other ham designs that I have measured.

ReturnLoss is -|s11|, it is simply stunning, a huge departure from most ham designs. Some that I have measured were less than 20dB at their specified lower frequency limit.

An interesting perspective is to disaggregate InsertionLoss (-|s21|) into Mismatch Loss and (Transmission) Loss. 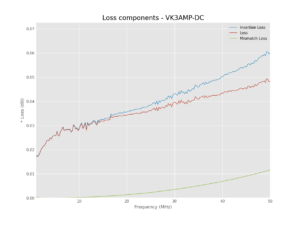 As we expect from the |s11| plot, MismatchLoss is very low, InsertionLoss is dominated by Loss. Loss tells us how much of the actual input power is converted to heat. 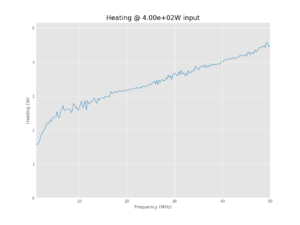 Above is a plot of the expected dissipation due to Loss. Most of it is likely to be in the ferrite cores, mainly in the voltage sampler with a 50Ω load.

Difficulties were encountered in adapting Kiciak’s design to the unmodified coupler. Kiciak didn’t deal with intercept and gain calibration entirely in the coupler or the display electronics, it is spread between them.

The VK3AMP coupler would have been much easier to use if it incorporated pots for intercept and gain calibration in each channel. This will not be an issue in my digital meter project as each channel (fwd, rev) will have slope and intercept calibration in the firmware. 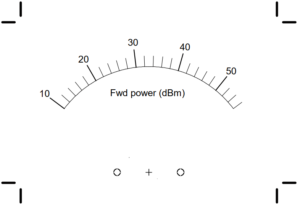 Above, the forward power meter scaled in dBm (Bruce’s preference). The sharp mind will recognise 56dBm is 400W. 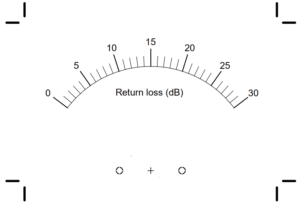 Above, the return loss meter scaled in dB. 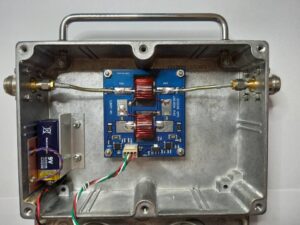 Above is the interior of VK4MQ’s build. 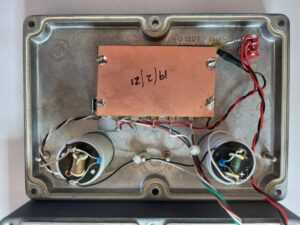 Above is the inside of the front panel. The electronics is built dead bug style on the PCB that is visible, the two meter movements are in the lower part. 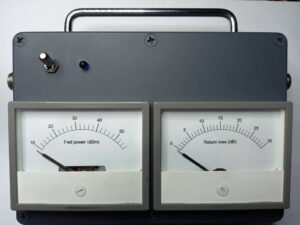 Above is the front panel with the rescaled meters recovered from some e-waste. The meter does not overhang the edge, it is a perspective issue with the pic.