We periodically have problems with rabbits from an adjoining reserve, and this summer has been bad enough to do something about the crepuscular critters.

Leghold traps from the factory are usually covered in some type of rust resisting oil combined with the residues of the manufacturing processes, all of which needs to be removed to de-scent the traps.

Practice varies, I spray them with ordinary degreaser and then after 5 min jet them clean with water.

There are a range of practices to colour and wax the traps, for rabbits I simply wax them and with supply shortages, I experimented with ordinary soy wax for container candles. This wax does not try hard, so it is not inclined to crack off, and it reduces rusting whilst lubricating moving parts. 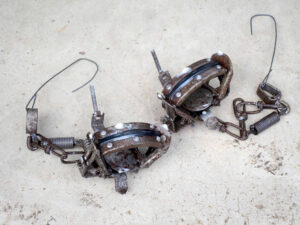 Above is a pair of Victor Softcatch #1 traps that have been cleaned, lightly rusted (for colour), cleaned again and waxed. I also use Bridger #1.65 traps which do not rust as easily, so they are used without colouring at all and they seem every bit as successful when covered in sieved soil. 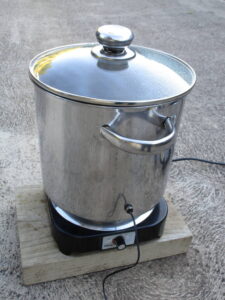 The pot has about 130mm of water, and floating on top about 20mm of soy wax. The traps are immersed in the water which heats them to about 85°,  then the trap is lifted slowly through the wax layer which coats the hot trap with a thin coat of wax.

A NTC thermistor is fitted to the pot to sense temperature for a thermostat. Much as I searched, I could not find this size of NTC fitted with silicone leads of 1m or more in length, that would be preferred, or even stainless braided PTFE insulated wires. 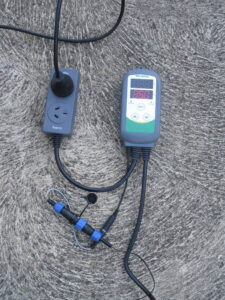 Above is an Inkbird ITC-308 modified to allow pluggable NTCs (10k/B3435) and shared with other applications. Be aware that there is slight variation in NTCs, especially cheap Chinese product, and for the most accurate display that you may need to adjust the calibration as described in the ITC-308 manual. An error of even 5° at 85° doesn’t matter much in this application, but if you got closer to boiling point (100°) it would be more significant.

The display is multiplexed and was not captured fully by the cameras short shutter speed, the top line is 86° at the time of the pic. This thermostat controls the cook top to keep the pot contents to 85°. 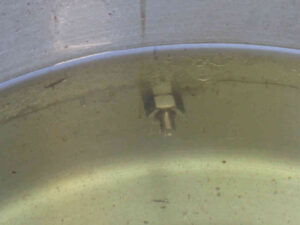 The M6 thermistor has a short stub to avoid fouling with the traps. It is mounted just a little above the bottom of the pot to decouple it a little from the heater. Obviously, the thermistor must be covered by the pot liquid to properly regulate the temperature. The water level is low in this pic (it was reduced for the pic), it would normally be 130mm or more to cover the traps, then 10-20mm of wax on top of that.

This pot is 210mm diameter, and filled to say 150mm, it contains 5.2l. Taking the specific heat of water as 4200J/kg/K, to raise the temperature from 10 to 85° requires 1.6MJ, and at 1100W input that requires 1500s or 25min. Heating time will actually be longer due to heat losses from the pot, and the melting of the wax, but you get the picture that it will take half an hour or so to come up to dipping temperature… which is why it is convenient to use the thermostat to monitor temperature. 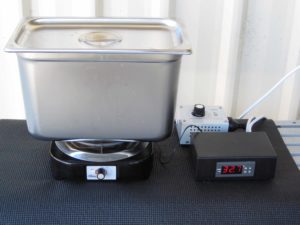 My preferred thermostat is the one described at Molasses derusting of steel . It is based on a MH1230A has a 30A rated relay, but you need to be careful buying, the Chinese cheats sell downgraded ones.

Build of a second thermostat is described at A DIY thermostat based on the MS1230A controller.