Fox Flasher MkII and several follow on articles described an animal deterrent based on a Chinese 8051 architecture microcontroller, the STC15F104E.

This is an update after several years operation outside, and some in-service modifications to improve performance. 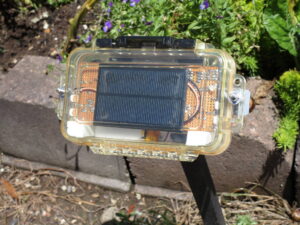 Above is the current version after 18 months in the weather.

Modifications since the last published article:

Both myself and a friend experienced very short life of 18650 cells, weeks rather than years. The enclosure does not allow free movement of cooling air, and at very sunny times, the internal temperature may reach temperatures that degrade the life of cells batteries, but the pouch type LiPo lasts for years.

The vent has cured the problem of periodic condensation. The enclosure is an airtight seal and initial deployment had a sachet of desiccant inside to try to ensure no free water, but on hot days, the internal temperature it would seem cause evaporation from the desiccant and at sunset water condensed on the inside. The Gore vent has been successful, no evidence of condensation internally.

The polycarbonate case has yellowed a little, but the PVA array appears to be in ‘as new’ condition visually. 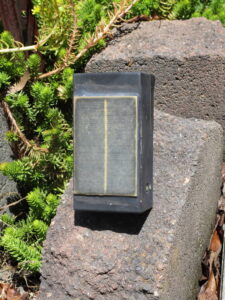 By contrast, the original prototype above had its PVA replaced 18 months ago and it is severely crazed on the surface.

These PVAs were $1 each on eBay, and obviously low grade encapsulation materials are used. The big problem when the market is flooded with cheap Chinese junk, is that quality product sells lower volume driving the prices up, but higher price does not imply quality.