With the popularity of the nanoVNA, the matter of optimisation of antenna systems comes up and the hoary chestnuts of ham radio are trotted out yet again.

Having skimmed a presentation published on the net, an interesting example is presented of an 80m half wave centre dipole with feed line and various plots from the nanoVNA used to illustrate the author’s take on things.

The author is obsessed with resonance and obsessed with phase, guiding the audience to phase as ‘the’ optimisation target. Phase of what you might ask… all the plots the author used to illustrate his point are phase of s11.

A model for discussion

I have constructed an NEC-4.2 model of a somewhat similar antenna to illustrate sound concepts. Since NEC-4.2 does not model lossy transmission lines (TL elements), we will import the feed point data into Simsmith to include transmission line loss in the model. 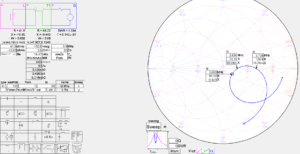 Above is the Simsmith model. 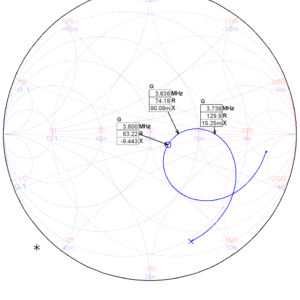 Above is the Smith chart looking into the feed line (click for a larger image).

There are three markers, from right to left:

Lets look at the power delivered to the antenna. 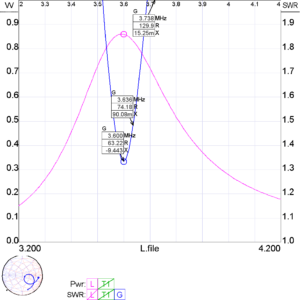 Above, we see that the power is maximum at approximately the same frequency as where VSWR is minimum. That is no coincidence, standing waves result in higher line loss in this scenario.

So, this antenna system will have best radiation efficiency at 3.6MHz because feed line losses are least.

Where the reference impedance for calculation of the complex reflection coefficient Γ or s11 is real, then when the angle of gamma is zero at some point, the ratio or V/I or impedance at that point is purely real (ie, zero reactance).

That says nothing for the value of the resistance, nor of the magnitude of Γ or s11 or of the VSWR.

Further, when the magnitude of s11 is very small (and VSWR is close to unity), the angle of Γ or s11 as measured is dominated by instrument noise and at the limit is essentially a random number and is meaningless.

So any optimisation based simply on angle of   Γ or s11 is naive in the extreme.

Optimisation for phase of load impedance at the source equal to zero means reactance X is equal to zero, but says nothing about the resistance component, and therefore about VSWR.

In the example above, at the frequency of minimum VSWR (least line loss, maximum power delivered to the antenna) the impedance looking into the line has a phase angle of -8.5°.

So any optimisation based simply on angle of impedance seen by the source is naive in the extreme.

Relationship between angle of reflection coefficient and angle of impedance

Zo and Γ are complex values, so we will separate them into the modulus and angle.

It is true that if ψ=0 and φ=0 that θ=0, but that does not imply a wider simple equality. This particular combination is sometimes convenient, particularly when ψ=0 as if often the case with a VNA.

for this type of antenna system are all misguided.

Claims that phase alone is some magic quantity that drives optimisation is misguided.

This type of antenna system can be optimised with the nanoVNA, and the optimisation target is VSWR.

Read widely, don’t accept plausible looking explanations that appeal simply because they appeal, without understanding them, specious works are widespread and swallowed by the gullible.