Further to Amidon’s method of rating ferrite inductors and transformers, this article discusses some interesting measurements of ferrite toroids by Manfred Mornhinweg (Mornhinweg 2019). 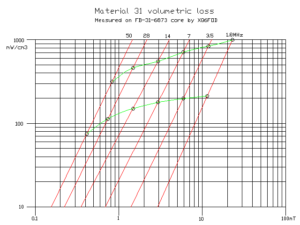 The first thing to consider is the slope of the the fitted line. 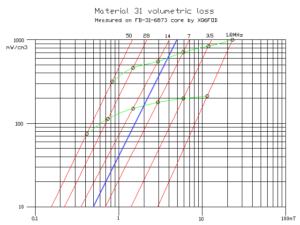 If the material was linear in its characteristic, we might expect the core heating to increase as the square of B. The blue line has such a slope and can be used to compare the slope of the red lines. By eye, they appear similar in slope, and no conclusions can be drawn about linearity as there are only two points for each frequency.

The other interesting this is B relative to the critical numbers given in Amidon’s advice. The table is in gauss, and 1 tesla (1T)=10000gauss.

The sparse points are a bit limiting… so lets explore whether there is a likely curve fit, whether they appear based on a simple relationship.

When plotted on log/log axes, the points fall roughly on a straight line. Considering that the table numbers are rounded, we cannot do better than to say Bcrit=f^2*15.1 where f is in MHz.

So, lets plot them on the chart. 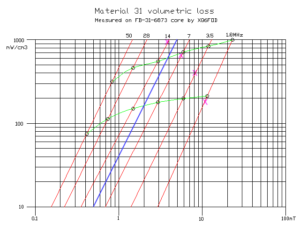 Above, the magenta X is at Amidons Bcrit value. It can be seen that both measurements at 1.8MHz were above Bcrit, and one of the measurements at 3.5MHz was well above Bcrit. Nevertheless each pair of measurements appear to be on approximately the same slope as the blue line, linear material. There is little evidence of saturation. 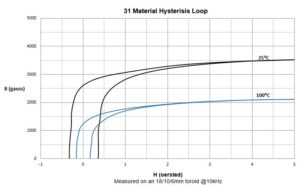 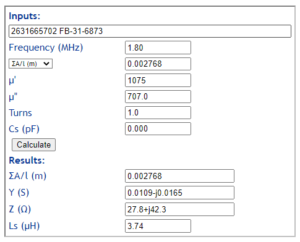 To be able to calculate the core loss, we need to know the voltage impressed on the winding at each of the test flux densities using the expression \(E=\frac{4.44 B A_e N F}{1e8}\).

We can then divide that by the core volume to obtain the core loss in W/cm^3 to compare to the plotted measurements.

The core loss could also be calculating by finding the magnitude of magnetising current \(Im=\frac{V}{Z_m)\) and calculating \(P=I^2R_m\). It reconciles with \(P=E^2 G_m\).