In a QST column in 2008, a correspondent asked the question

… I have the ladder line terminated to double coaxes that run about 12′ (4m) inside the house to an antenna tuner. Should this pair of coaxes be grounded at one end or both ends? 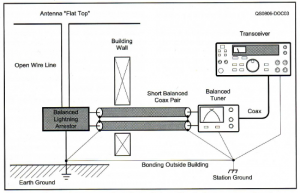 The Doctor gave a detailed diagram (above) and his advice was…

Whilst it is critical for proper operation for the shields of the two coaxes to be tied together at each end, whether they are tied to “ground” is not important to operation, but can make a big improvement in lightning protection.

I think his advice quite wrong, I will tell you why.

Lets quickly review the meaning of common mode current, and why it is usually undesirable.

We can decompose the current flowing in each conductor at any point along the open wire feed line into two components, a differential component and common mode component.

The differential component is that component associated with an equal in magnitude but opposite in phase component in the other conductor and since the components approximately cancel each other, they do not give rise to significant radiation.

The common mode component is that component that is associated with an equal magnitude and same phase component in the other conductor, they are additive and do result in radiation. This unintended radiation directly from the feed line may cause interference with other electronics, and may change the antenna pattern undesirably.

On receive, common mode current may give rise to increased noise pickup from nearby noise sources (like house wiring). The potential for higher than necessary noise pickup is undesirable.

(Duffy 2009) gives a detailed analysis of the current flows at the ends of a shielded twin construction. 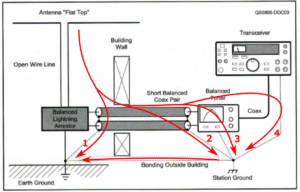 Above I have annotated QST’s diagram with four possible paths for common mode current to flow to ground. I have assumed that the lightning arrestor does not pass significant current to ground under normal operation.

Paths 2, 3, and 4 result in RF currents flowing within the shack, and that increases the prospect of unsafe EMR levels and interference with electronics. Note there is prospectively current on the bonding cable shown.

If path 1 is short and direct, it is likely that most of the common mode current will flow to ground by that path.

If the ATU contains an effective current balun, then current via paths 3 and 4 should be quite low.

The Doctor didn’t think it mattered much which ends of the shielded twin construction were grounded. That is clearly naive.

If the external end of the shielded twin construction were not grounded, current path 1 would not exist, and now the current would flow into the shack and to ground by the available paths which includes path 2, a relatively low impedance path to ground. Again, if the ATU contains an effective current balun, then current via paths 3 and 4 should be quite low and so most of the current should flow to ground via path 2 provided it is reasonably direct and short.

If neither path 1 or path2  were connected, then this would work much like the case when the open wire line was taken all the way to the ATU. If the ATU contained an effective current balun, the high choking (or common mode) impedance of the balun would tend to reduce common mode current.

This shielded twin configuration is often proposed as some kind of magic solution to problems, but it is usually not well understood.

It is sometimes explained that the effect of the shield is to contain all fields within the shield, that there will be no external fields. In the case where the shield carries significant common mode current (certainly if path 1 does not exist) then there are significant magnetic fields due to that current, and of course you cannot move charge (current) without creating a potential difference and therefore electric field.

Though one frequently hears of this being implemented, it doesn’t usually work as intended, and is often a really bad idea.