I have set out an initial design method for RF inductors and transformers using toroidal ferrite cores and over time I get correspondence drawing my attention to Amidon’s advice, specifically sections 1-35 and 1-36.

Section 1-36 states explicitly that it is applicable to Iron Powder and Ferrite, which is interesting because they are very different materials from a loss point of view.

Basically, their method depends on a maximum safe value for peak flux density.

Note that the table and formula are independent of ferrite mix type (though they do mention that “these figures may vary slightly according to the type of material being used.”

So, lets work some examples being a 3t primary at 7MHz on FT240 cores of #43 and #61 material. The two material types are very popular for HF RF inductors and transformers, and were chosen for that reason rather than designing an example that shows extreme difference.

Using VK1SV’s online calculator of Amidon’s method, we get…

By trial and error, it is found that 83V is just ‘safe’ for this transformer, irrespective of material.

Now lets do a permeability based calculation of magnetising admittance and then power lost in the core Pcore at 83V applied for the #43 core. 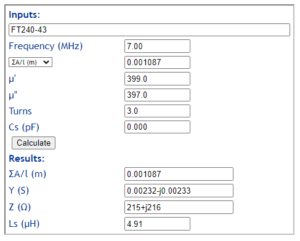 Note, this is a small signal analysis, but as explained, flux density is way way below saturation.

Now lets do a permeability based calculation of magnetising admittance and then power lost in the core Pcore at 83V applied for the #61 core. The Amidon method is probably unsafe. 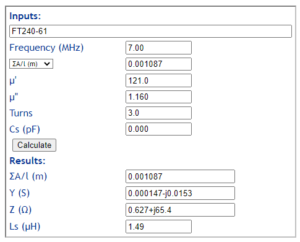 Note, this is a small signal analysis, but as explained, flux density is way way below saturation.

Can you verify these results?

The simplest way is to make a measurement of the magnetising admittance (or impedance from which you can calculate admittance).

Now keep in mind that the tolerance of ferrite are fairly wide, so your measured results won’t exactly reconcile with the calculations above, but you should find a wide disparity in the core loss for the two materials and question the usefulness of Amidon’s method.

So, before you accept online expert’s advice on either side of this argument… make some measurements and develop trust in the tools you use.

Amidon’s method is manifestly poor. People who recommend it have probably not tested its validity, and both damages their credibility.

For ferrites at RF (and zero DC current), operation is more likely to be limited by dissipation than magnetic saturation, and in that case, the flux density is not usually very interesting.