Hams often would like to know the impedance of an antenna at its feed point, sometimes for very sound reasons, and very often in pursuit of a specious goal.

One of the oft given suggestions is that it is convenient to measure through an integral number of electrical halfwaves of transmission line, since as everyone knows, impedance at the end of the line is repeated exactly every half wave towards the source.

Some even tell us that they cut their feed line lengths to exactly nλ/2 to facilitate this at implementation an into the future. So, lets take that idea and cut the feedline to the shortest nλ/2 that will reach the feed point 100m distant. The electrical length of a VF=0.83 feedline will need to be nλ/2 or 1080° at our nominal frequency of interest, 7.2MHz.

To explore the method, let’s use the modelled feed point impedance of a 40m Inverted V Dipole used in some recent articles. 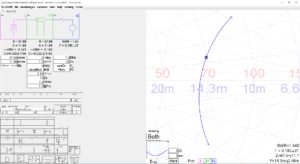 Above is a Simsmith model of the feed point impedance, The blue line overlays the magenta line which is the locus of s11 from the NEC model. 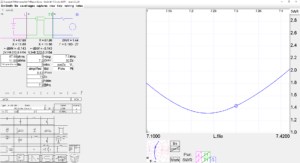 Above is the VSWR(50) curve of the same scenario. 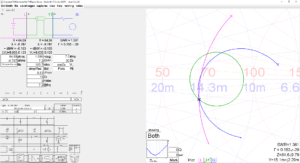 Above is a Simsmith simulation of the scenario, in this case for our nλ/2 of lossless line. The magenta line is the impedance locus from the NEC model, the green curve illustrates the transformation in the transmission line and in this case it results in exactly the same impedance at 7.2MHz… the theory seems to work? 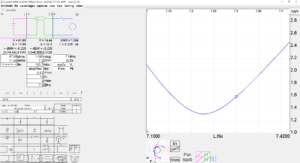 Lets simply increase the line loss to the measured 1.2dB/100m at 7.2MHz (which is a reasonably low loss line). All loss is attributed to conductor loss in this model, a reasonable assumption for this line at this frequency. 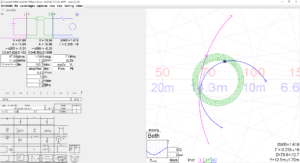 Above is the Simsmith chart when measured line loss is added to the model.

The green line shows the ‘path’ from the load to the line input along the line at 7.3MHz, and at the input to the line, the impedance is now quite different to to the feed point impedance.

Further, the blue line, the locus of s11 looking into the line is quite different to that at the feed point, it is not only smaller in radius but it is rotated clockwise a little.

Why is the blue line rotated? Why is it a spiral path?

The ‘rule’ that impedance repeats exactly every half wave is true ONLY for lossless lines, and only approximately true for low loss lines… in this case the error is not huge, but it may be significant. 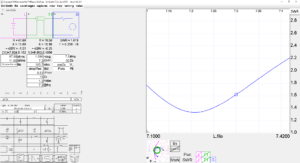 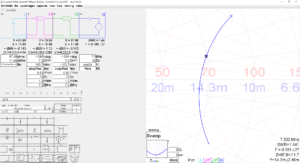 Certainly, the above model includes T2, a -ve length of equivalent feed line which backs out the transformation in T1, the simulated real feed line.

This looks great, but the accuracy of this depends on how accurately the analysis tool models the real coax… and in this case both models are internal to the tool and so the backout is perfect… but it is less perfect in real world cables and real world tool line models and data.

Nevertheless, it remains a very useful technique in some situations. It is good practice to validate the tools and models you intend to use.

Many analysers and all VNAs permit calibration to an arbitrary reference plane, and if this calibration is carried out at the end of the feed line, then measurements are with reference to that point.

If you were able to save and reload the calibration data at a later time, measurements could be repeated referred to that point. Be warned that there is no guarantee that your calibration file will be usable with later versions of your software, some software developers seem to take a cavalier attitude to backwards compatibility.

The ‘rule’ that impedance at the end of the line is repeated exactly every half wave towards the source applies ONLY to lossless lines, and no practical lines are actually lossless. The error in applying this ‘rule’ to practical lines may be significant.

The idea of using nλ/2 of practical transmission lines to make accurate impedance measurements is flawed.