I have seen several online posts of hams citing measurement of phase of s11 as a figure of merit of a matched antenna system, indeed evidence of the resonance nirvana.

Let’s review the meaning of s11.

s11 is the complex reflection coefficient at the reference plane, usually wrt Zo=50+j0Ω.

If you were to measure the s11 looking into an ATU, you might adjust the ATU to minimise the magnitude of s11 (|s11|) which is also minimises VSWR. If you do a really really good job of adjustment, you might achieve around the noise floor of the instrument.

You can simulate this near perfect match by simply sweeping your 50Ω calibration load. Let’s do that and look at some relevant views. 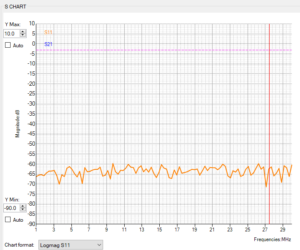 Above, |s11| expressed in dB is very low, it is at the noise floor of the calibrated instrument, and it is very jittery… due to the relatively high contribution of noise. 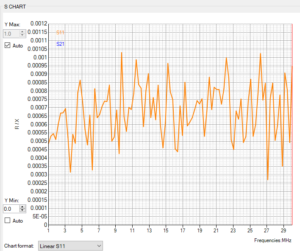 Above is a linear plot of |s11| from the same sweep, the almost random nature is visible and proven by repeating the sweep several times and there is no consistent pattern… it is essentially a random complex value due to the dominance of noise (a random phenomena).

So, what do you think the phase of this random value will look like? 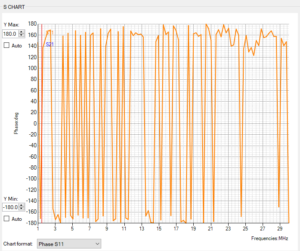 Well, it too is pretty random, again demonstrated by repeated scans. It is not quite an ideal randomly distributed pattern which hints that there is some systematic noise in the nanoVNA, not too surprising. 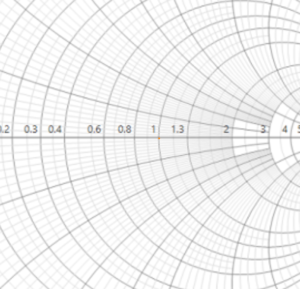 Above is a Smith chart view of the same scan, and if you look carefully, you will see the orange dot which is actually 101 points plotted. The phase of s11 is the angle of each of the 101 vectors from the chart centre, it is not even discernable on this scale of plot.

Try this experiment yourself, but for best accuracy, OSL calibrate the nanovna (or whatever) immediately before performing the above measurements.

The statistic that is interesting in many if not most antenna systems is |s11|. Lets look at an example. 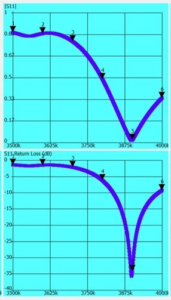 Above, at 3900kHz (marker 5), |S11| is a minimum and a very small one at that. The bottom plot is a Hammy Sammy Return Loss plot, Return Loss is actually defined at -20log|s11| and gives a +ve value but here you see it plotted as a negative quantity to make guys who think loss MUST be -ve dB comfortable. Actual Return Loss is around +36dB, very good, equivalent VSWR is 1.03.

For very good matches, s11 is approaching the noise floor of the instrument and s11 is dominated by noise, it approaches a random magnitude and phase randomly distributed.

Citing these measurement as proof of Walt Maxwell’s description of the way that an ATU works is very misguided. Nevertheless it feeds confirmation bias, one of the forms of logical fallacy.