VK2TP at Wellington has been making observations of aircraft enhancement of the path between my 144MHz beacon and Wellington, an obstructed direct path of 259km. The beacon modulation pattern includes a long steady carrier which permits better observation of the nature of these aircraft enhanced paths. 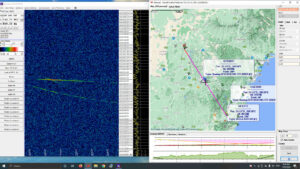 The screenshot above is of SpectrumLab waterfall display of the receiver output and a view of the position of relevant aircraft.

Two of the aircraft are behind the path, ie a backscatter path.