One sees discussions online regarding the suitability of various conductor materials for antennas and feedlines.

A recent thread asked about steel as an antenna radiator and one response tried to answer the question using NEC models of a half wave 40m dipole. 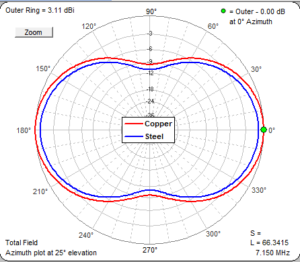 Above is the graphic offered to support the analysis that steel is only 0.5dB behind copper, the poster stating:

I wouldn’t hesitate to build an antenna out of Steel wire if to make it out of Copper I would have to drive into town, and expose myself to the unmasked idiots at Home Depot!

is held to determine fact… that is so important to modern hams.

If indeed the difference was only 0.5dB, then it might be a good choice in some situations.

The reported results did not accord with my previous studies and measurements, so I recreated the models in NEC-4.2 as far as I could from the available data. (There are a lot of articles on this site… use the Google search box.)

So, my copper model should be an exact copy of the stated data, and my steel model assumes σ=5e6 and µ=800 (typical of mild steel which might be used of soft steel wire), and the length adjusted for resonance (as in the original). 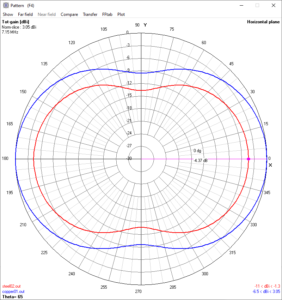 Wow, this indicates the steel is 4.4dB worse, quite a different result. Worth reporting is that the feed point impedances were:

Also notable is that the wire is 6.5% shorter due partly to its higher internal inductance.

Conductor loss increases from 1.7% to 63.7% going from copper to steel.

Both of these effects can be observed by measuring a prototype antenna, a steel wire antenna will tend to resonate at shorter length and have higher feed point resistance at resonance.

Note that the results are quite dependent on the characteristics of the steel, frequency, and wire diameter and do not apply to clad wires such as CCS or galvanised wire.

NEC-4.2 natively models conductor AC resistance based on conductivity and permeability. The original NEC-2 engine did not consider permeability, though some adaptations of the engine have tried to implement an approximation.

The first graphic is closer to what I get using rel permeability 1, and what I would expect from NEC-2.

It is possible there are other differences in the models or the algorithms used by the tools.

Note: the conclusions give here are for a specific scenario, and it is not simply extensible to other scenarios.